Stable HIV testing and increased condomless casual sex rates have raised a few concerns for experts, but continued high rates of testing along with reports of very high undetectable viral loads have offered some good news for the state. THE annual study of the sexual behaviours and patterns for men who have sex with men (MSM), the Gay Community Periodic Survey (GCPS), has produced what some experts have called a mixed bag of good and bad news for Queensland.

With over 1500 men responding to the survey conducted by the University of NSW’s Centre for Social Research in Health and Queensland Positive People (QPP), results have found that in good news, HIV testing levels remain high with 85 per cent of respondents saying they have been tested for it.

Advertisement
However, the remaining 15 per cent reported never being tested for HIV, along with a lower rate of HIV-negative men saying they’ve been tested within the past year (72 per cent).

According to lead GCPS investigator and UNSW associate professor Martin Holt, this indicated that more work needed to be done.

“It takes a great deal of concerted effort to reduce barriers to testing and see a significant increase in the uptake of testing by gay men,” he told the Star Observer.

“Queensland has started down this road, but it will need to sustain efforts to increase HIV testing over a number of years.”

Scott Brown, the head of Community HIV Education and Prevention (CHEP) – a team facilitated by QPP and HIV Foundation Queensland (HIVFQ) – said testing levels may be higher than what the GCPS indicated due to an increase in testing sites and services offered by QPP, HIVFQ and the Queensland AIDS Council after the survey was conducted.

“Although rates have remained stable amongst the survey participants, the 2014 GCPS ran in August-September last year and would therefore not capture the increase that has occurred since the expansion of services in Brisbane since August,” Brown told the Star Observer.

He also highlighted a recent increase in testing at key Brisbane GP clinics at a rate of 36 per cent – a result that did not include the amount of rapid HIV tests being done.

“RAPID (clinic in Fortitude Valley) alone has tested over 660 gay men since August and just under 200 of those are gay men who reported not testing within the previous 12 months,” Brown said.

As treatment as prevention (TasP) starts to gain momentum nationally, Brown indicated that educating MSM to the advantages of early treatment would be on the cards soon for CHEP and HIVFQ.

“There are many factors that play a part in someone choosing to begin treatment, and although there wasn’t an increase from 2013, 85 per cent of the HIV-positive men who responded to the survey stated they were on treatment, which was a significant increase from 2010,” he said.

Pointing to a recent review of the Pharmaceutical Benefit Scheme’s in regards to earlier access to HIV medications, Brown said that TasP would feature more prominently soon.

“HIVFQ recently signed a memorandum of understanding with the Canadian British Columbia Centre for Excellence in HIV/AIDS who operate under a model of seek, test, treat,” he said.

“This model will be adapted for Queensland so there will be more of a focus on treatment in 2015/2016.”

One result that concerned both Holt and Brown was the 41 per cent of men reporting condomless sex with casual partners organised via mobile phone apps, a result increasing over time.

“Condomless sex with casual partners remains the primary way that gay men acquire HIV, so of course I am concerned to see the continuing high rate of this practice by men in Queensland,” Holt said.

“Men in Queensland are more likely to report sex without condoms with casual partners than men in Sydney or Melbourne, which is concerning.

“There has been a large increase in sex without condoms by untested/unknown status men in Queensland over the last five years, which is particularly worrying, as these men have no concrete idea whether the sex they are having is safe or not.

“This also underscores the need to encourage and support the uptake of HIV testing, particularly among men who have avoided or never considered testing before.”

Men were also more likely to report condomless sex with casual partners and less likely to know about post-exposure prophylaxis (PEP), a result that worried Brown.

“It’s also worth highlighting that disclosure of HIV status before sex with any casual partner has increased significantly, which is a promising sign, although raises its own concerns about people accurately knowing their HIV status,” he said.

Nonetheless, this was another positive result from the GCPS, with both HIV-negative and HIV-positive men reporting increased disclosure prior to sexual intercourse over time. Disclosure to any casual partner was higher among HIV-positive men at a rate of 78.6 per cent, and 64.8 per cent for HIV-negative men.

Both results have increased “significantly” since 2010, which both Brown and Holt cautiously indicated was due to a possible improvement with regards to HIV stigma.

“It is absolutely a good thing people are being more open in discussing their status and with greater awareness this would ideally lead to a reduction in stigma, but we can’t make that conclusion from these results as the GCPS doesn’t measure community attitudes so we should be careful in linking the two,” Brown said.

Meanwhile, crystal methamphetamine use remained an issue for those undertaking HIV prevention work, further highlighted by an increase in its use in the Queensland gay community between 2010 and 2014. On the other hand, usage of other drugs has actually declined.

“Meth use has increased a small amount in Queensland over the last five years, and is reported by one in 10 men,” Holt said.

“Most of these men will only use the drug occasionally and won’t experience any lasting problems, but there will be a minority for whom their drug use is too much and gets out of control, and we need to be sure these men can get help and support.

“HIV-positive men routinely report higher rates of drug use than HIV-negative men, we see this across Australia.

“Obviously, with increased rates of use you are more likely to experience adverse health effects, so it’s important that organisations that work with HIV-positive men have harm reduction programs in place to advise and support their communities.”

“Any drug use that impairs a person’s judgement or decision making and increases the level of risk for HIV transmission or acquisition is a concern,” he said.

According to Holt and Brown, despite some worrying behaviours indicated by 2014’s GCPS, there were some interesting developments and positive trends.

“I think it’s great that for the first time the GCPS had an online recruitment option,” Brown said.

“Just over one in three of the men were recruited via the internet, which is really encouraging.

“It’s great we can now reach more gay men and hear from don’t go to gay venues or participate in gay events.

Brown also said that more than nine out of 10 HIV-positive men on treatment reported an undetectable viral load.

For Holt, the continued increased use of mobile apps struck him as an interesting development for MSM.

“[It] is fascinating. It means that gay and bisexual men are socialising and getting to know each other in different ways, but they’re also having to work out how to negotiate safe sex through a different medium,” he said.

“I’d encourage everyone to be explicit about what they’re looking for when looking for sex using apps. Don’t assume.”

Next post The NSW politicians popping up on Grindr 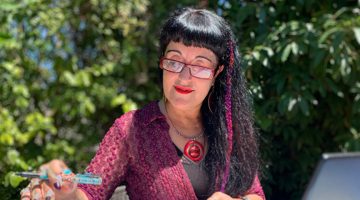