‘The church has bought into this false narrative of God vs gay’: religious freedom in Australia

"As a principal I'm highly aware of the disturbing mental health statistics for those who are trans or gender diverse... these aren't just numbers. They represent real people who deserve our support." 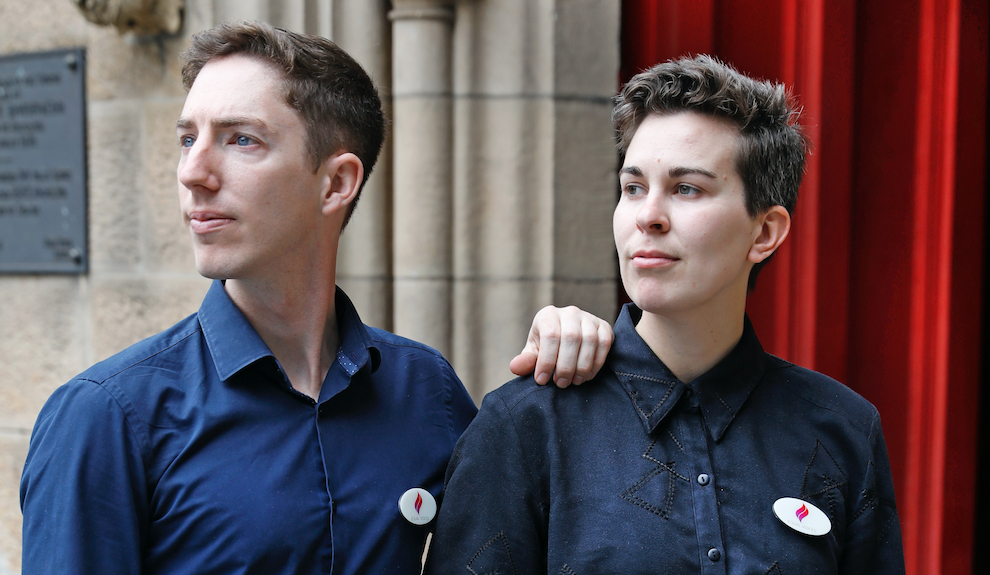 Parliament is currently abuzz with debate around the protection of students and staff in faith-based schools, an issue around religious freedom that likely won’t be resolved until 2019. Matthew Wade reports.

The legislative change enabling same-sex partners to marry was a momentous coup for the country, but what if faith-based florists, photographers, bakers, and designers were able to selectively deny their services on the grounds of sexual orientation?

Advertisement
The Philip Ruddock-led review received more than 15,500 submissions, presenting a dichotomy between conservative religious figures – who demanded their right to discriminate be enshrined – and community leaders and organisations, who fought back.

Ruddock and his expert panel provided a report with recommendations to the government in May this year, but in the months following this, the government was largely silent and the report remained unpublished, suggesting apathy and another drawn out process.

This changed, however, when Fairfax Media published leaked recommendations from the report in October, which controversially called on the government to allow faith-based schools to discriminate against students and staff on the basis of sexual orientation, gender identity, or relationship status.

The leak brought existing exemptions in the Sex Discrimination Act to light, and prompted politicians, community advocates, and religious leaders to urge current Prime Minister Scott Morrison to fix Australia’s legislation before the end of the year, and to protect sexual and gender diverse students and staff.

And yet, the debate rages on in parliament, with an outcome unlikely until 2019.

Co-chair of LGBTI Christian organisation Equal Voices, Joel Hollier, says the debate has caused both him and many others like him whiplash.

As a former pastor and current PhD student in theology who grew up in the church, he believes religious leaders should be standing up for marginalised and oppressed members of the community.

“On one hand [LGBTI Christians] love the church and want to protect the church, but on the other hand we love our LGBTI siblings, and we see them colliding,” he says.

“I don’t want the church to go down a route that harms itself, and I think the churches and religious leaders lobbying for legislative exemptions are harming themselves.

“It’s a sign that the church has bought into this false narrative of God versus gay.”

When Hollier first became aware of his same-sex attraction as a teenager, he was angry with God, and decided that he believed people could be gay, but that it was wrong to act on those feelings.

He says he would teach this message in church, until he began to study the Bible more thoroughly and realised it could be read in many ways.

“I saw a number of queer people in my world that were suffering hugely because of the theology I was teaching,” he says.

“There’s a narrative both within the church and in society that you can either be gay, or be a Christian, and that’s the overarching narrative we hear over and over again.

“What I’ve come to realise is that it’s a false story – it makes no sense, because there are so many people who are both, and that’s where the conservative wing of the church have got it wrong.”

Despite the current debate around faith-based schools’ right to discriminate in parliament, Hollier believes that above legislative change, a cultural shift needs to take place to truly make students and staff in those environments feel welcome.

He says the church’s fear that they’re losing power in society has led to their renewed efforts to protect exemptions when it comes to discriminating against the LGBTI community.

“My hope is that churches and schools and faith-based leaders would actually want to care for LGBTI people, so my hope isn’t in legislation,” he says.

“Policy does a little bit, but what we wouldn’t want is for the policy to change and then for the leaders in schools to have a martyr complex, where they feel hard done by.

“I just want LGBTI students to know they are so deeply loved by so many people, and as a member of the church I want to apologise to the LGBTI staff for the pain they’re going through, as somebody who in the past has taught the wrong message.”

Last month, in response to a letter signed by 34 Sydney Anglican schools urging the government to maintain discriminatory exemptions, 46 principals from faith-based schools signed a counter letter stating that “religious exemptions that permit discrimination have no place in [their] schools”. One of the letter’s signees, principal of Carey Baptist Grammar School Philip Grutzner, says all schools should provide an environment and culture that is safe, inclusive, and welcoming.

“I oppose current federal legislation which allows religious schools to discriminate against staff or students on the basis of their gender identity or sexual orientation,” he says.

“As a principal, I’m highly aware of the disturbing mental health statistics for those who are transgender or gender diverse.

“These aren’t just numbers. They represent real people who deserve our support, as do their friends and family.”

Grutzner adds that his message to Scott Morrison is clear.

“Discriminating against any staff member, child or young person, especially those who are particularly vulnerable, for any reason, is fundamentally wrong and inconsistent with the core Christian message of love,” he says.

“Those of us in a position of power have a huge responsibility to advocate for these people and promote measures that protect them from discrimination and prejudice. It’s that simple.

“As a Christian and leader of a Christian school, I look to the example of Jesus who welcomed all people from all backgrounds.”

Fellow co-chair of Equal Voices, Steff Fenton, believes that through the debate the church has unfairly elevated sexual orientation and gender identity as posing a crisis to core Christian values.

Rather, she believes they’ve sacrificed actual Christian values in the process.

“The values of unconditional grace, self sacrifice, service to others, and even protection of the vulnerable… it’s hard to see a message of love be skewed the way it has,” she says.

“I think there’s often a split between institutional leaders of churches and Christian lobby groups, and often those groups tend to be on the more conservative side, and slower to catch up with the rest of the community.

“The more conservative groups tend to dominate the conversation, but it’s often not representative of the rest of the church.”

Fenton never thought for a moment she couldn’t be both Christian and gay.

She’s attended church her entire life, even playing Jesus in her local Anglican church’s nativity play when she was only one week old.

When it comes to the Ruddock-led review and parliament’s current debate around religious freedom for faith-based schools, Fenton believes the removal of discrimination against marginalised individuals is central to the Christian ethos.

“God is very clear in the Bible,” she says.

“[LGBTI Christians] are loved as they are. They’re wonderful in their uniqueness, and there are many people like them in church. There’s a place for them.”

She adds that through Equal Voices she hopes to help acknowledge that all voices are equal in the church.

“We’re a national movement of Christians who believe in full LGBTI inclusion across the Australian church,” she says.

“We come from all different denominations, so we’re hopeful for full inclusion and that’s what we’re working towards.

“People being different is what makes them valuable in the community of the church.”