In the greatest little capital in the world, not everything can be right in the centre of the city.

But like any great little city, sometimes you have to head off the beaten track to find the real gems. Outgames volleyball in Porirua is one of them.

Held across four courts at the Te Rauparaha Arena, the first and only day of Outgames’ volleyball was awash with Australian teams, mostly from Melbourne. Hannah JV met up with Melbourne Spikers founding member Lorraine Little to find out more about the travelling team of boys and girls in purple.

I sat down with Lorraine during the match up of the C-graded ‘Mixed Lollies’ from New Zealand and ‘Sausage Fest’ from the Melbourne Spikers. Lorraine played later in the day as part of Melbourne’s ‘Gum Nuts’ team – she plays in the higher grades, but that’s not surprising, Lorraine has been playing for the Spikers since it began 25 years ago!

“The thing I like about the Spikers is that they’re a big bunch of friendly people who really enjoy socialising and travelling with each other. We have more than 100 members and we’ve travelled all over the world,” Lorraine said.

Spikers members meet weekly – some meet to play socially whilst others train to play competitively. Lorraine says that on any given week, Spikers teams play around six games of volleyball.

“We have an annual summer tournament where two or three straight teams will compete,” she said.

Lorraine, who was one of the people on the committee that chose Wellington as this year’s host city, says she is proud of the achievements made by those who brought Outgames to the capital.

“They set out to include more women than ever before and succeeded – that has been well documented. But they also set out to help the community of Wellington connect again – they wanted to meet up with people who they hadn’t spoken to in years and involve them in the games; they wanted to get people talking and networking again and that’s clearly worked.”

“That coming together feeling that the community has right now, happened in Melbourne at the first Asia Pacific Outgames and lasted long after the games finished; I guarantee it will happen here.

“Those who organised the games will be tired by the end of it, but the legacy of Outgames will play out for years to come.” 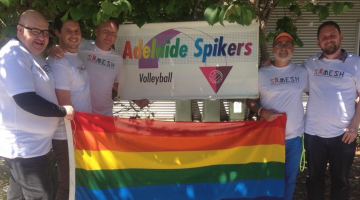