The nation’s most LGBTI-friendly businesses have been honoured at the annual Pride in Diversity lunch.

Curtin University in Perth was named as Australia’s most queer-friendly university workplace, while UnitingCare Ageing NSW/ACT took out the new Not-for-Profit/Charity Award. The Australian Federal Police were honoured as the highest-ranking public sector organisation.

Pride in Diversity program director Dawn Hough said this year’s competition was the largest yet.

“Submissions this year were up by 65 percent and over 3000 employees took part in the process,” Hough said.

“This has made gaining entry to the Top Ten much more difficult, which shows that organisations throughout Australia are taking very seriously their work in this area and that LGBTI inclusion within Australian workplaces is on the rise.” 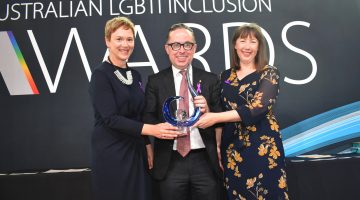