Guide to being a newly-single gay dad

THE end of a relationship can be hard, but it can be an even bigger challenge when you have just come out as a gay man and have two kids. 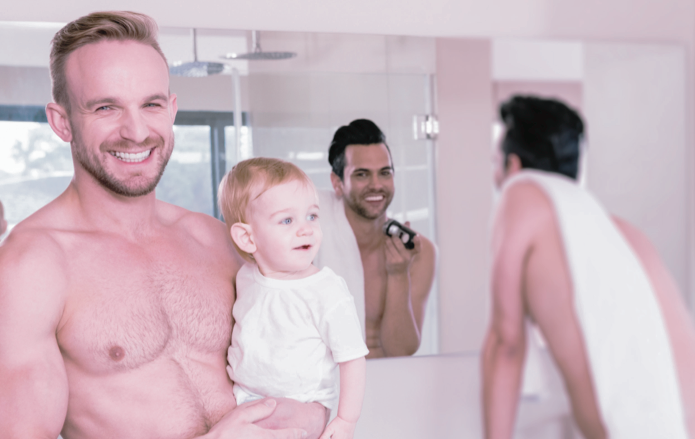 FOR anyone emerging from the rubble of a broken marriage, dating can be a challenge. But when you have recently come out as a gay man, and are throwing an ex-wife and two children into the mix, then that challenge becomes a minefield of tough negotiations.

After my marriage ended in 2007, and I finally admitted to the world and myself that I was gay at the age of 30, I had no idea how to date – let alone how to date as a newly gay man or as a single dad.

Advertisement
My sons (then aged eight and six) weren’t living with me full time, so it made dating a little easier. I could date without the pressures of working out how the children fitted into my new world.

At first I wouldn’t openly disclose that I was a father to two young boys. I was terrified of being rejected and thought it would complicate things.

When I did get around to nervously mentioning it, I’d often be met with surprise and then bombarded with questions like do they know you’re gay? Did you know you were gay before you got married or became a dad? Would you show affection to guys in front of them? What happens if your kids saw me in your house?

But the most common concern was: Aren’t they really expensive to look after?

In the beginning I didn’t know how to answer some of these questions but I soon developed ‘scripted’ answers for the ‘interview process’.

At the time I had no idea these answers would play such an important role in me finding a compatible partner.

Some men said they’d never date a man with kids. Some men were more direct and declared within minutes that they hated kids.

It became clear that for many guys, kids were deal breakers.

Other men were open to the idea, but wanted to take things slow. So slow in fact, that I couldn’t work out if I was even dating them. Then there were the hopefuls. The men who are open to children or have a desire to be a dad themselves.

But they came with their own set of reservations.

Many wondered out loud whether my kids would like them, whether they were responsible enough to be a “step parent”, and whether they’d have to meet my ex.

Over time I realised the more these fears were openly discussed, the easier it was to put them to rest to have a good crack at the relationship. It can take time for hopefuls to feel comfortable around children.

Everyone, including the kids, has to find their own groove within the relationship dynamics.

If you’re looking to date a man with children, you have to understand his kids are his number one priority. If you can’t accept that then I doubt you’ll have a future with him. Recently, I re-entered the dating scene following a long-term relationship with my ex-boyfriend.

This time my circumstances have changed as my sons are now living with me. I don’t have time to beat around the bush – I’m upfront about being a dad and the responsibilities it carries. I not only include the word DAD on any online dating profile, but also clearly explain when I meet people:

My time is limited, My children come first, so it’s a package deal.
I need space so I don’t dump kid dramas on you.
I’m not looking for another dad for my children – they already have one.
I don’t have the same financial freedom other single gay men have.

For men in my situation who are “newly gay”, it’s important remember kids need time to adjust to changes in family dynamics. They may also need time to accept that you are gay, let alone dating.

It’s important to ask your children how they’re feeling about both issues. It’s vital to make an effort to answer their questions. If you feel comfortable enough and believe they’re ready to meet someone, introduce them.

Always do the introduction with caution and expect the unexpected. Put yourself in their shoes and consider how their feelings. Listen to their needs. Maybe all they need is time

Being a full-time single parent can be exhausting at the best of times, and while many of us would love to share our life with someone, dating isn’t everything. Spending Friday night on the couch, eating pizza and watching Netflix with your kids, is still the best date any gay dad can have because before you know it, they’re 18 and ready to leave the nest.

Finding a partner is tough whether you’re gay or straight. But when you’re a parent you have extra responsibilities. You need to find someone who will not only compliment you, but is also mature and loving enough to navigate life with kids as well.

About the Author Jason Williamson