THERE’S more to being a gay icon than just glitter, sequins and big hair. And it’s a role that Samantha Jade takes seriously.

When the Firestarter singer heard about the Orlando shooting tragedy, she made it a priority to organise a series of performances at some Australia’s biggest gay hotspots – including a special fundraiser at Brisbane’s Fluffy nightclub and a performance at the Midwinta Ball in Melbourne.

Advertisement
“I was devastated,” Jade tells the Star Observer.

“It was so sad and intense – it just affects you, and you really do start to think about your life, how short it is and how much you need to love and support one another. It really hit quite hard.”

Describing the gay community as some of her biggest supporters, Jade says she feels it is her place to stand up for them on issues like marriage equality and to honour those who lost their lives in the Orlando shooting.

But she is still unsure what it is that makes her so popular with the community.

“I feel like the gay community, for me, the audiences are different – they’re really appreciative of y’know, great choreography and how hard you work on stage, and even when you hit a high note.

“I think there’s a different appreciation there. I’m not sure what it is but I’m happy to have it.”

The Midwinta Ball has gone on to become a key event in the LGBTI community over the past two years – with this year’s event promising to be bigger than ever.

All money raised goes to fostering the development of aspiring talent in the Midsumma Festival.

Gretel Killeen will host the event, and a number of other big celebrity names will be hosting tables, including Chrissie Swan.

Read our full interview with Samantha Jade in the August issue of Star Observer. 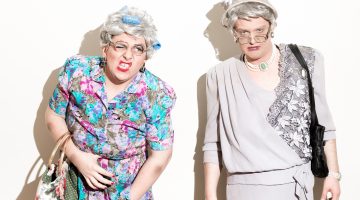 Gretel Killeen to host this year’s Midwinta Gala in Melbourne