And the Honour Award goes to ….

Don’t forget the annual Honour Awards are on Thursday night, with a hot field of finalists nominated for the six awards.

More than 100 nominations were received, and ACON CEO Nicolas Parkhill said the judges were impressed with the quality and variety.

“Selecting the finalists was a difficult process because the achievements and contributions of all the nominees were remarkable in their own way,” Parkhill said.

“However, judges agreed that the finalists they selected exhibited a truly outstanding commitment to supporting the GLBT community.”

Finalists for the Community Organisation Award include The Pinnacle Foundation, the Inner City Legal Centre, Tropical Fruits, and Acceptance Sydney.

Winners will be presented with gifts and prizes at a gala ceremony and cocktail party at The Ivy in Sydney on Thursday, September 29, 7-11pm.

The silent auction is also set to be one of the night’s highlights, with a slew of amazing prizes on offer for those in attendance.

Close to 40 items will be auctioned at the awards ceremony and cocktail party at the Ivy in Sydney on Thursday, September 29.

Leading the auction is a business-class trip for two to New York on United Airlines with three nights’ accommodation at the five-star Jewel Hotel in Manhattan and dinner over the famous Rockefeller Plaza ice rink.

Other items include five tailor-made business suits, and an arts package with VIP tickets to Sydney’s most celebrated cultural events including Bell Shakespeare, the Australian Chamber Orchestra and a private tour of the forthcoming Picasso exhibition at the Art Gallery of NSW.

There’s also a business class trip for two to Macau with two nights accommodation at the MGM Grand; 12 months of cosmetic procedures and beauty treatments; clothing and accessories from Prada, Tom Ford and Abercrombie & Fitch; a private tour of the forthcoming Picasso exhibition at the Art Gallery of NSW; and tickets to Placido Domingo, Dame Kiri, Elton John and Dolly Parton.

Stars already confirmed for the evening include long-term community supporter Marcia Hines, fashion designer Peter Morrisey, Foxtel’s Andrew Mercado, plus a few surprises to be revealed on the night.

Money raised from ticket sales and a silent auction on the night will help fund ACON’s non-HIV health work.

INFO: Tickets from www.honourawards.com.au $85 per person. 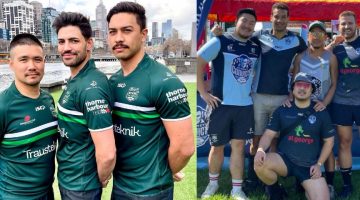