Actor Nelsan Ellis passed away over the weekend aged 39 from a complication with heart failure. ACTOR Nelsan Ellis, known for his role as flamboyant gay character Lafayette Reynolds on True Blood, has passed away aged 39.

Advertisement
He had been set to appear at Queer Expo in Melbourne next weekend.

“We are extremely heartbroken to hear this morning that our guest and the incredible actor and person Nelsan Ellis has passed away,” said organisers on Facebook.

“We cannot express our sorrow and heartache at this news.”

Ellis is mourned by the LGBTI community after his iconic portrayal of a gay man of colour on True Blood.

In 2009, he said in an interview that although he was straight, his father disapproved of him playing a gay role.

“Truth of the matter is, he don’t want his son prancing around in lipstick and makeup, playing some gay dude,” he said.

Ellis is remembered as a champion of gay rights. He performed in scenes that challenged homophobia, and in 2014 criticised a fellow cast member on True Blood who quit rather than play his character in a gay relationship with Ellis’s.

Fans have posted messages on social media remembering Ellis, and GLAAD tweeted their condolences for him as a friend of the LGBTI community.

Nelsan Ellis gave us a Black gay character that was unapologetically strong while being authentic. Thespians in the industry take note. pic.twitter.com/XQhsUi4EPN

Nelsan Ellis really bought life to Lafayette in Ture Blood. He was a gay character who was sexy, strong, and bold, but completely relatable.

LAFAYETTE HELPED MAKE ME THE RADICAL GAY I AM! NO JOKE, HE WAS SO INSPIRING. Nelsan Ellis is very missed for this https://t.co/sl9T9dFu0J 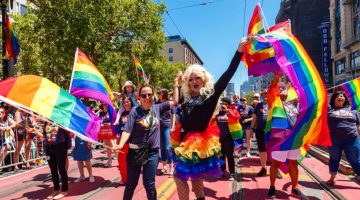