A spokesman for the anti-gay Australian Family Association (AFA) has failed in a bid to become the Liberal candidate for Baulkham Hills at the NSW state election.

Damien Tudehope, a father of nine and a member of the ultra-conservative Opus Dei sect of Catholicism, was backed by the hard right Uglies faction of the Liberals led by David Clarke MLC.

The AFA campaigned against the relationship register and adoption by same-sex couples in NSW, and tried to get the Howard Government to ban transsexuals from marrying people of their birth sex as part of the 2004 ban on same-sex marriage.

The AFA is one of a number of groups pushing to have the anniversary of the ban declared ‘National Marriage Day’.

NSW Gay and Lesbian Rights Lobby convenor Kellie McDonald said the NSW Liberals had been smart to reject Tudehope as a candidate if they hoped to keep supporters in the GLBT community.

“The GLRL is pleased that Mr Tudehope, who has been opposed to the recognition of same-sex relationships and families, has lost his preselection bid for the NSW state election,” McDonald said.

“It may be in the Liberal Party’s best interests to reject candidates who promote ultra-conservative views so as to appeal to a broader audience, including the LGBT community.” 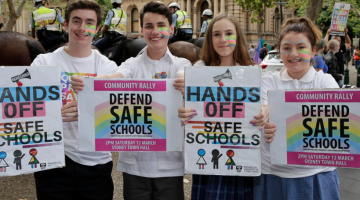