The AFL wants the sport to be inclusive for LGBTI people and players. IT has been about 12 months since Jason Masters came out and what made that event so significant was that he came out at the tender age of 52.

“I always knew that I liked boys more than girls, but got the messaging from my father that that wasn’t ok. So I did what I was told was acceptable, got married and had kids,” he told the Star Observer.

Advertisement
Once he was out, friends had told him it was important to find support networks to connect with and as a passionate Sydney Swans supporter it seemed appropriate he join the Rainbow Swans – the official LGBTI support group of Sydney’s first AFL team.

The Rainbow Swans have 360 members – one of the biggest LGBTI supporter groups in the AFL – who get together regularly to attend home games and watch the Swans at local establishments when they’re on the road.

“Growing up I had a lot of troubles with my dad and when I went to see the school chaplain about it, he recommended we find somewhere neutral to be,” Masters said.

“And that place was at the footy. A lot of people feel they face abuse homophobia at the footy, but for me it was the reverse, it was a space I could hang out with my dad in a safe way.

Masters was speaking at the Swans’ launch of their participation in this Saturday’s Pride Game against the St Kilda Saints in Melbourne. 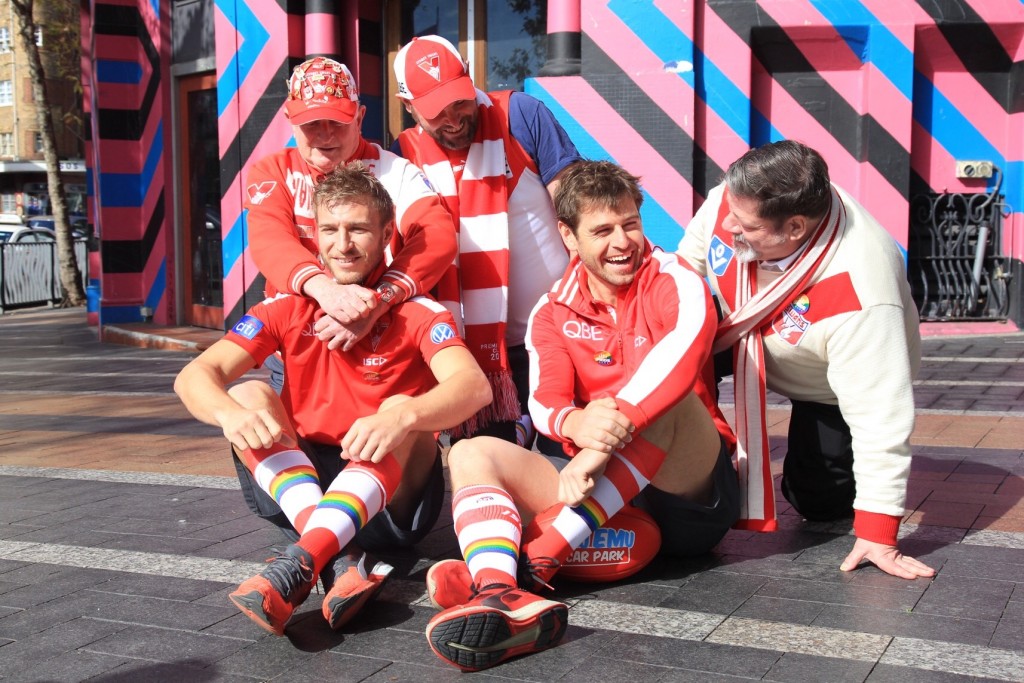 The Pride Game is designed to embrace LGBTI people into the AFL and according to the Swans is “about making everyone feel welcome at the football”. It is the first time a Pride Game has been held at a professional sports level anywhere in the world.

The Swans will don rainbow socks for the game, while the Saints will wear custom rainbow guernseys.

“As a playing group, we’re happy to support the inclusive nature of it, respect for anyone’s sexual orientation, all the guys are really happy to get behind it,” Smith said. 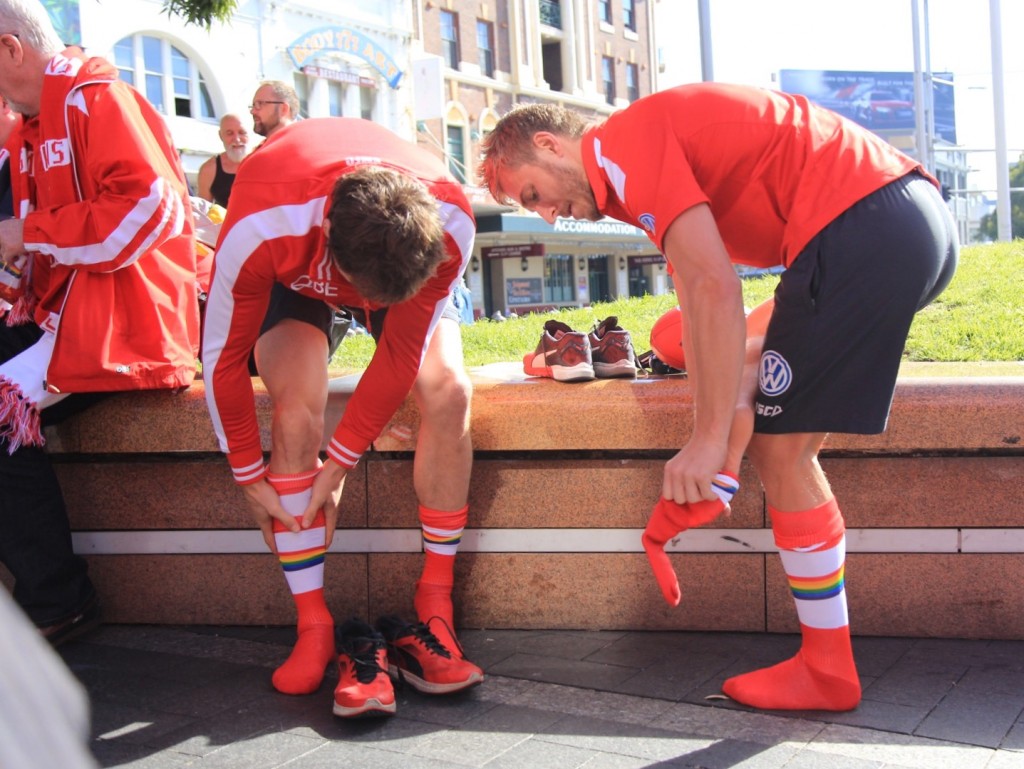 Pridham said the AFL had a long way to go to become more inclusive, but both the Swans and the league were taking on leadership roles to support LGBTI people. He went on to say that statistically there must be gay players in the AFL and all the Swans can do is make the environment more comfortable for a player to come out.

“I can understand why it’s so difficult, we saw the really difficult period Adam Goodes went through when he supported Indigenous causes and just how brutal the football community can be on game day,” he said.

“It’s a sad reflection on our society that 80 per cent of same-sex attracted people feel threatened to go to professional sports, this is something we’re determined to end.

“Further on the playing side, it’s greatly distressing to us that 87 per cent of professional sports people feel uncomfortable to disclose their sexual preference. We believe taking a step such as the Pride Game is an important to step to make the game more open.

“I think there’s a great – excuse the pun – but pride in the fact their club is a leader in promoting these causes.

“No-one should feel ashamed to come to the footy and hold their partner’s hand” 🌈 #PrideGame https://t.co/47KecYGkGd pic.twitter.com/oOhEVEgG6K

“We’re not going to solve everything with one game,” McLachlan said.

“It’s happened in other issues that have confronted us, and in this pride round, people will talk about sexuality and hopefully have conversations and hopefully we can make a small indent in some young peoples’ lives that they feel comfortable coming out or having the conversations they need to have or feel that little bit more accepted, then we’ve done our role.”

Next post Aussie film looks at coming out in high school