"The Chargettes are a merry band of misfits" “It started as a gag, but the crowd went wild and we saw there was an opportunity to keep going,” he says.

Advertisement
“I was never a sporty person in the slightest, so the Chargettes were a cool gateway for me to get involved, and they helped to soften the hypermasculinity often associated with sport.”

The Chargettes are the official drag cheerleaders for Melbourne’s LGBTI-inclusive rugby team the Chargers, and they champion the team while wearing matching leotards, skirts, and heels – with rugby socks, of course.

The group consists of six players and WAGS (“wives” and “girlfriends” of sportspeople) and Young says they help to create more intersectionality and diversity in the game.

“A lot of people think they have to have a particular body type to get involved in rugby, but we create a more comfortable space,” he says.

“People might be intimidated to walk up to the rugby boys but we help to give LGBTI people a sense of familiarity by creating a link between the gay world and sport.”

Aside from performing at various fundraising events for the Chargers, the Chargettes have also supported the team at both Midsumma Pride March and Mardi Gras’ Pride March, and have taken part in a baby drag competition that saw them take home the crown and a $1,000 prize. “We’re getting quite well-known as a separate entity away from the Chargers as well,” he says.

Fellow Chargette and WAG Robbie Latour – also known by his drag alter ego Bettina Buttons – joined the group a year ago to tick off a pending item on his bucket list.

“I’ve wanted to try drag ever since I was 19 when I had my drag name picked out already,” he says.

“I thought I was going to wait until a 30th or 40th birthday, but I thought the Chargettes were as good an opportunity as any.”

Latour’s partner is a rugby player, and has been with the Chargers for five seasons.

And while he’s never really gotten involved in sport before, the Chargers have provided a comfortable and safe space for him to do so. “I call the Chargers and the Chargettes a merry band of misfits, who all came together and found each other, regardless of their passion for sport,” he says.

“[The Chargettes] may not be the best drag queens in Melbourne, but we’re amateur queens trying to look and do as professional a job as we can.

Latour’s claim was made evident when a scheduled competition in Melbourne-based bar Mollie’s had to be moved to the downstairs bar Sircuit to accommodate the crowd, which snaked around the door and down the street.

He says that while the Chargers are diverse and the Chargettes help to shift pre-conceived notions of sport being isolating for LGBTI people, above all else it’s a social team.

“One of the great things about the Chargers is that for someone like me there’s a social aspect as well,” he says.

“The majority of my partner’s friends and what we do socially is around the team.

“I think we broaden the appeal for people to come along.”

Next post Warren Entsch: all I'm asking for is a bloody vote 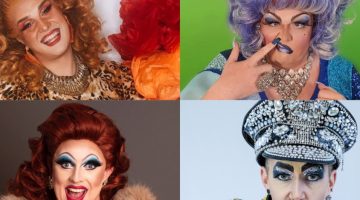