PFLAG Toowoomba gears up with IDAHOT 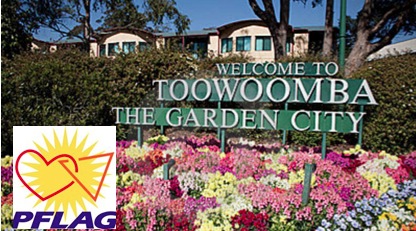 A PEER support group for families of LGBTI children was set up in Toowoomba last year.

PFLAG Toowoomba runs regular parent meetings, and is gearing up to run monthly events to unite the community. The group wants to make Toowoomba and the surrounding towns a more welcoming place to live for people who identify as LGBTI.

Advertisement
PFLAG Toowoomba spokesperson Diane Spearritt said they want their kids to have the opportunity to lead full lives as themselves and to love who they want to love.

Toowoomba is a major education hub with boarding schools for rural Darling Downs farms, as well many private and state schools.

The Department of Education website currently only provides schools with two pages to support LGBTI young people in Queensland schools, with PFLAG group hoping to fill some of the gaps.

Spearritt’s child came out as trans in 2014 and it was a complete surprise. She and her husband knew nothing about trans issues and found there were not many places in Toowoomba for information or support. Teachers in the area were not specifically trained and she had to educate the staff herself.

Their child was in clear distress from gender dysphoria and Spearritt felt supporting their child was the most important thing they could do. The family worked hard to find a counselling professional specifically training in that area.

“Toowoomba has plenty of psychiatrists and general practitioners, however it’s not easy to negotiate the health system and months later, we found a child psychologist specialist in gender disorder at the Lady Cilento Children’s Hospital in Brisbane,” Spearitt said.

Eventually they found specialist support in Toowoomba and finding a LGBTIQ experienced general practitioner or psychiatrist is just one of the areas where PFLAG excels.

“I felt PFLAG was something Toowoomba really needed. We’ve managed to make links with other LGBTI groups and local members with the hopes of forming a LGBTI community in Toowoomba that is a bit more open,” she said.

“We are supported by QuAC monthly and that’s great, we also need to compile local Toowoomba health resources into a directory so people know where they can go for help here instead or journeying the two hours to Brisbane. The names of people who have a particular interest in LGBTI issues are not well known in the community,” Spearritt said.

PFLAG Toowoomba are there to listen and provide information. In particular, they are building a community of parents, family and friends of LGBTIQ people where they can share their experiences and support for each other and their loved ones. A secondary focus is to more directly support and advocate for LGBTIQ people and to join with them in any issues they have.

Last month, Sharon Dane, co-conveyor of Australian Marriage Equality in Queensland held a workshop. An IDAHOT picnic was also held on Sunday. Some coming events include a shared information stall with Diverse Voices for World Environment Day in early June and an event for ‘Wear Purple Day’ in August.

The University of Southern Queensland (USQ) will be supporting IDAHOT by flying rainbow flags at all three campuses. USQ Toowoomba will celebrate in the Quad on Wednesday May 18 from 12 – 2pm.