Gay rugby team the Melbourne Chargers honoured their players, staff and supporters at Sircuit on Monday night at the team’s annual awards night.

Hosted by JOY 94.9’s Dean Beck, the theme of the night was “diversity in sport”. Guest speakers Ji Wallace (pictured) and Jason Ball discussed their experiences, and the difference gay athletes and sporting communities make to young people coming to terms with their sexuality.

Ball, an Australian rules footballer, said that although he feared the worst before he came out publicly and began his campaign to address homophobia in the AFL, he has received a huge amount of support from his team mates.

“There’s a perception that if you speak up for gay people you’ll be considered gay.”

Ball went on to say the Chargers were playing an important role in making sport safer for LGBTI people.

“I’m so proud to know clubs like the Melbourne Chargers exist.”

In his speech, Wallace, who publicly revealed he was HIV-positive in the Star Observer earlier this year, praised clubs like the Chargers for making it easier for young LGBTI men and women to deal with their sexuality in a sporting environment.

Before presenting some of the night’s awards, coach Neil Hay recalled being asked to get involved with the Chargers.

“I didn’t even know Melbourne had a gay rugby team,” he said.

Hay praised the team’s growth and development, and spoke about the challenges of working with a team with diverse backgrounds and skill levels.

“Some of them had played rugby before, but not many,” he joked.

Major awards of the night went to Derryn Pert for Highest Scorer, Joel Anderson for Most Improved, and the BJ Lancken Cup for best and fairest went to Mark Rowland.

SEE IMAGES FROM THE NIGHT HERE 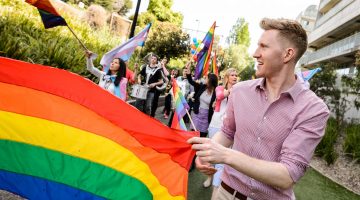