We’re getting there, as a society, right? More and more people have heard about various trans issues, and are getting used to radical ideas like calling people by the name and pronoun they ask you to use. You might even have a trans friend or two.

Advertisement
This month, the Victorian Equal Opportunity and Human Rights Commission released a guide to respectful reporting on trans folks and gender diversity. It’s easy to use and all rather common-sense stuff, really. Among other things, it recommends against making a big deal out of a trans person’s gender when it’s irrelevant, calling them by their old name, or sensationalising a story on the basis of gender.

These principles have been discussed before, particularly following instances of horrible insensitive reporting about trans people over the last few years. Trans visibility and routine media coverage is relatively new, but of all people, reporters should be able to keep current on how write respectfully about minority groups.

Which brings me to the transphobic trash I came across on a news site recently.

A woman named Evie Amati is accused of attacking two customers at the Enmore 7-Eleven. An Australian news website I won’t name (but you could find easily enough if you want to formally complain, as I have) appears to have Facebook stalked Evie to discover that she’s trans, and published a lengthy “exclusive” focusing on just that.

Seriously, on only that. The headline calls her by her old name, and that’s the whole story, that a woman they recently reported on turned out to be trans.

Imagine if the scandalous reveal had been that she turned out to be a lesbian? Perhaps 20 or 30 years ago it might have been, but we don’t stand for that garbage anymore, and we shouldn’t stand for this either.

To the news site’s bare credit, the story refers to Evie throughout by her correct name and gender pronouns, when it’s not discussing her past.

The amount of deeply personal information about Evie’s old life, along with pre-transition photos and screenshots of Facebook coming-out posts, in an alleged news article is nothing short of disgusting. It appears to breach the Australian Press Council’s Privacy Principles. And this is a 24-year-old trans kid being picked on.

Don’t say it shouldn’t have been on Facebook if she didn’t want it reported on. We’ve all stuffed up our privacy management on Facebook, and regardless, the onus here is on the reporter to treat a trans woman with dignity and respect. Yes, I know she’s accused of a violent crime. We don’t respond to that with transphobic gossip.

As a trans person, I’ve sat in work offices and felt my heart drop as I heard people calling me by the wrong gender pronouns. I’ve been approached by a colleague who Facebook stalked me and wanted to know more about my transition, and let me tell you that is goddamn terrifying when you thought you were passing and it was all behind you. (Pro tip: it turns out anyone can still see all your old profile photos even if your Facebook profile is on Secret Squirrel mode.)

This is, without hyperbole, the sort of thing people kill themselves over.

This is the sort of thing that gets trans people murdered.

It is 2017 and we report on trans people, like the rest of the LGBTI community, with sensitivity and respect. We don’t conduct ourselves like sensationalist tabloids at the expense of a person’s basic privacy and dignity. 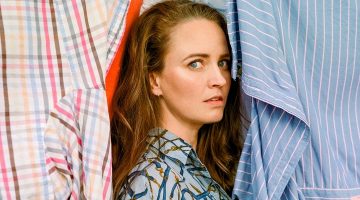