In the latest monthly segment of Q&A profiles of LGBTI entertainers around Australia, Troy Murphy caught up with Kam Shafaati — a well-known gay DJ in Melbourne whose success has seen him headline parties around Australia and the US.

Kam Shafaati from Melbourne is one of Australia's well-known gay DJs. (Supplied photo)

Q: When did you start DJing and what or who were your early passions and influences?

A: I started DJing six years ago, but I’ve been passionate about music and clubbing culture for over a decade. One day I just decided to buy DJing equipment and started practicing at home. Within 12 months I was getting gigs at bars and clubs around Melbourne and Sydney.

[showads ad=MREC]Q: Aside from the club music you play, what would be your favourite music genre?

A:  I have a broad taste in music, including lots of stuff I don’t play in clubs: RnB, jazz, chillout, and symphony. They still influence me and are incorporated in my club music.

Q: Looking over the past few decades, in your mind what was the best era for music?

Q: What makes a good song?

A: Depends on the person and the environment. Personally, I look for intricacy in production and a balance between catchy and unpredictable melodies, vocals, and baselines.

Q: With your work, you are well-travelled. In your opinion, which state in Australia has the best party crowds? 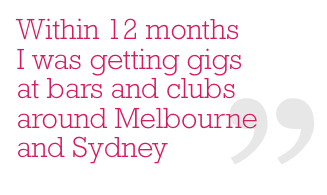 A: Melbourne, of course.

Q: What was it like to DJ in New York City for BRÜT?

A: Amazing! Performing in front 1000 people in New York City was mind blowing.

Q: How are the American crowds different to Australia?

A: Not a big difference overall but electronic dance music is a fairly new sound for the older generations in the US — so playing dance music with rock or pop influences helps win them over, usually.

Q: With marriage equality on the horizon, do you see yourself being asked or would you consider DJing at gay weddings?

A: Maybe not the wedding, but definitely the bachelor party [laughs].

Q: What’s your go-to song to fill the dance floor?

A: Cirez D vs Sneaky Sound System — Pictures On Off (Bootleg)

Q: Has there been a stand out moment in your career?

A: DJing in the Hordern Pavilion and the parade at Sydney Gay and Lesbian Mardi Gras. Also, DJing in Black Rock Desert at Burning Man in the US.