The Imperial presents two special events for the long weekend. Friday night starts off with the new show Diamond In The Rough, starring Decoda Secret as a modern day Marilyn Monroe. Bringing some of the traditional drag glamour back to the stage, the show stars four of the most talented male dancers in the country. These stunning boys are Heath Keating, James Maxfield, Jason Jowett and the show’s producer Wil Sabin. Between the four of them their resumes read like a list of the world’s biggest stars – dancing for artists including Kylie Minogue, Kesha, Taylor Swift and Deborah Cox.

The first show has a classic spin, featuring Marilyn’s classics Diamonds are a Girl’s Best Friend and I Wanna be Loved by You and finishing with some showstoppers from the award-winning TV show ‘Smash’. The second show is much darker – think New York, think underground, think Paris in the 1920s. Mixed with today’s hottest hits, including Britney’s controversial hit Work Bitch, this is a show you’ll keep coming back to. 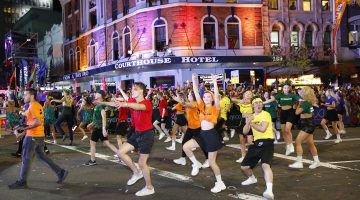