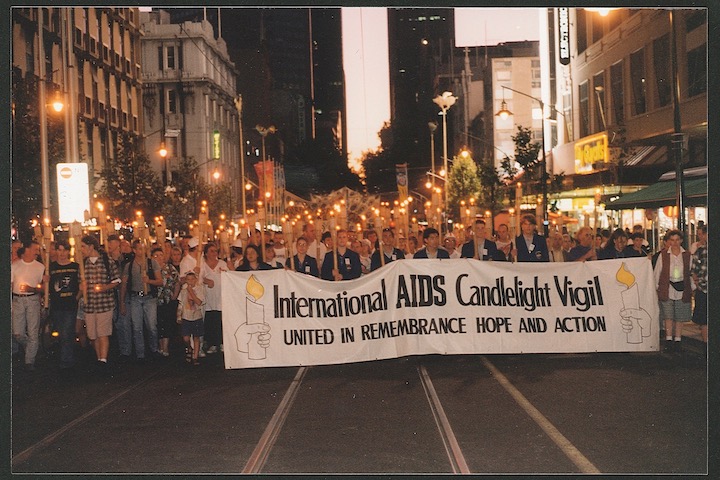 On the evening of December 1, 1988, the first ever World AIDS Day, hundreds of people packed into the Martin Place amphitheatre in Sydney for a rally to honour the hundreds of Australians who had died from AIDS-related causes.

For the first time, the Australian AIDS Memorial Quilt was publicly unveiled, comprised of dozens of panels dedicated to the memory of friends, family and loved ones who had lost their lives due to AIDS.

According to The Sydney Morning Herald, 500 people stood to be counted, symbolising more than 500 Australians who had died from AIDS, and 1000 balloons were released into the night sky.

The event was a display of grief and resilience in the face of the epidemic that had ravaged Australia’s gay community since the first recorded diagnosis of HIV, then known as Gay Related Immune Deficiency (GRID), in 1982. In the coming years, AIDS would claim thousands more lives before an effective treatment was developed.

Phil Carswell OAM, a founding member and inaugural President of the Victorian AIDS Council, told the Star Observer the “overwhelming feeling” in the gay community in the initial stages of the AIDS epidemic was “sheer terror”.

“We didn’t know what was coming or how bad it was going to be,” Carswell said.

“We spent ’83 and ’84 preparing and organising, but it wasn’t until ‘84 or ‘85 that we finally understood just how terrifying this was all going to be. That window of time between when we first knew about the disease and when the first cases arrived was really important in preparing us.”

Several AIDS councils were formed in the early 1980s and eventually united as the Australian Federation of AIDS Organisations in 1985.

The swift, measured and compassionate response of community groups and public health organisations working together to educate the public about HIV/AIDS, implement prevention strategies and care for the sick gave Australia a reputation as a global leader in the fight against AIDS.

Even so, Carswell said, “Nothing could prepare us for what we went through.” He described 1989 to 1996 as the “darkest years” when AIDS carved a bloody swathe through the community.

It didn’t take long for mass hysteria to ensue, partly as a result of the media’s inflammatory coverage of the AIDS epidemic. Some newspapers printed headlines calling it a “gay plague” or “homosexual cancer”. Every day, Carswell said, it seemed there was another misleading or alarmist story about HIV/AIDS.

Then came the infamous Grim Reaper commercial in 1987, commissioned by the federal government’s National Advisory Committee on AIDS to raise public awareness, which depicted the towering spectre of death bowling over men, women and children while an ominous voice-over warned that AIDS could “kill more people than World War II”.

The commercial was perhaps too effective.

In 1989, The Age reported that “fear of AIDS is more widespread than AIDS itself,” and referred to several popular myths about how the virus could be transmitted, such as by eating in the same restaurant, sitting on the same toilet seat, swimming in the same pool or sharing the same elevator as someone with HIV/AIDS.

According to Carswell, the myths persisted because they “overlapped with general homophobia”.

“Any excuse to reinforce existing homophobia was something most people accepted,” he said.

“Even before people started getting really sick, just the notion that you were gay was enough to put people on the back foot.”

He added World AIDS Day was a “great idea” because it gave HIV activists a “national platform” to dispel myths about AIDS.

‘We got to lead the debate rather than reacting to all the negative stories,” he said.

But even children weren’t safe from the stigma associated with AIDS. In 1985, three-year-old Eve van Grafhorst, one of the first Australian children to contract HIV via blood transfusion, was banned from her local pre-school.

Her neighbours became so hostile that the family eventually moved to New Zealand, where she died from AIDS-related causes in 1993. That year, the Commonwealth Disability Discrimination Act made discrimination on the grounds of HIV status illegal in Australia.

Some people with AIDS chose not to wait for the virus to kill them. In 1990, The Sydney Morning Herald reported that Sydney Gay and Lesbian Mardi Gras president Brian McGahen had opted for voluntary euthanasia.

He was visited by several friends on his deathbed, including Sydney Lord Mayor Clover Moore, then a state MP, who had previously served on the Sydney City Council alongside him.

Finally, in 1996, after thousands of AIDS-related deaths and almost 15 years after the first HIV diagnosis in Australia, it was discovered that a combination of HIV medications could stop the virus in its tracks. According to Carswell, some people with AIDS “literally got up from their deathbeds,” although the lifesaving treatment came too late for many.

Today, Australia owes one of the lowest rates of HIV transmission in the world to the continued work of HIV activists and health professionals. But the work is far from over.

Carswell said HIV transmission rates in the Indigenous and rural communities are a worry and that PrEP – pre-exposure prophylaxis, an antiretroviral that prevents HIV transmission – should be made available to everyone.

“I don’t want it to only end up in the hands of rich, white, middle-class boys who can afford it,” he said.

A TIMELINE OF HIV/AIDS IN AUSTRALIA

1981: The Star Observer (then known as the Sydney Star) is the first publication in Australia to report on a new “type of pneumonia” linked to the “homosexual lifestyle” in the US.

1982: The first case of HIV, then known as Gay Related Immune Deficiency (GRID), is diagnosed in Sydney, with the first death recorded in Melbourne a year later.

1985: Eve van Grafhorst, one of the first Australian children to contract HIV via blood transfusion, makes national news when she is banned from her pre-school.

1988: The Australian AIDS Memorial Quilt is launched in Sydney on the first World AIDS Day.

1993: The Commonwealth Disability Discrimination Act makes discrimination on the grounds of HIV status illegal in Australia.

1996: After 15 years and thousands of AIDS-related deaths in Australia, a lifesaving combination of HIV medications offers hope to people living with HIV.

2016:  A combination of two antiretroviral medications, sold under the brand name Truvada, is approved by the Therapeutic Goods Administration for use as pre-exposure prophylaxis (PrEP) in Australia.

2018: PrEP is listed on the Pharmaceutical Benefits Scheme in Australia, ensuring its widespread, government subsidised availability.