The two actors, who shared a tender kiss in the film, dedicated their award to the 'misfits'. Stars of the hit indie film Moonlight have taken home the award for Best Kiss at the recent MTV Movie Awards in Los Angeles.

The queer film follows an African-American man across three significant chapters in his life as he deals with his burgeoning sexuality.

Advertisement
Actors Ashton Sanders and Jharrel Jerome – who play the teenage iterations of Chiron and Kevin in the film – won the award for the tender kiss they share during a poignant beach scene.

Accepting the award, Jermone dedicated it to ‘the others, the misfits’.

“It is okay for us young performers, especially us minority performers, to step out of the box,” he said onstage.

“And so this award is for that — for us artists who are out there who need to step out of the box to do whatever it takes to get people to wake up.”

Sanders said the award was a significant feat for anyone that’s ever felt like an outsider.

“This award is bigger than Jharrel and I,” said.

Earlier this year Moonlight became the first LGBTI film to receive the Academy Award for Best Picture, after a mistake initially saw the film’s rival La La Land announced as the winner. 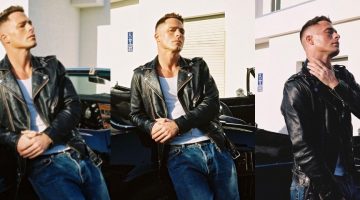