‘A good sharp knife will do’: school shut after parents threaten trans student

Other commenters repeatedly misgender the 12-year-old girl, and refer to her as "it", "this thing", and a "half baked maggot". 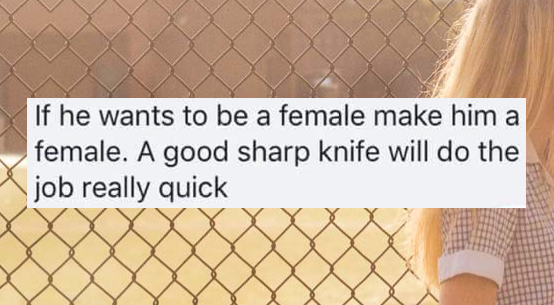 Background image: Provided by Minus18.

A school in Oklahoma has been closed after parents posted transphobic messages, including a threat of castration, about a trans student on Facebook.

The Facebook group is for parents in Achille, Oklahama, and began with one member writing a post which said, “The transgender is already using the girls bathroom.”

Other commenters refer to Maddie as “it”, “this thing”, and a “half baked maggot”.

Then one member, Eddie Belcher, commented, “If he wants to become female make him a female. A good sharp knife will do the job really quick.”

Other comments shared in screenshots, seemingly from other parents in the school district, suggest parents encourage their kids to attack Maddie.

Maddie had attended the school for two years and was using the staff bathroom to avoid harassment, but upon starting at the new middle school used the girls bathroom on an occasion when she couldn’t find the staff facilities, according to ThinkProgress.

Around 20 people staged a silent demonstration a couple of blocks from the school in support of Maddie’s right to attend safely.

The town’s superintendent had closed the school over fears the demonstration could be counter-protested, saying it would be safer not to have the kids at the school in case the protest escalates.

The school will reopen today.

“She’s an awesome kid,” Maddie’s mother told a local CBS News affiliate. “To see any fear in her, I can’t explain how bad that hurts me for them to hurt her.”

“That’s a threat against her life – that’s scary. These are adults making threats. I don’t understand it,” she said.

Maddie’s mother took out a protective order against one of the parents, while the FBI and other law enforcement agencies are investigating whether the comments constitute a hate crime.

This brought tears to my eyes. Right in my backyard. — I need to know how Achille ISD supt., @joy4ok, and other authorities plan to protect this young girl from future violence and abuse. We have a duty to protect our children. #OklaEd @oksde pic.twitter.com/yef863KjOy

Oklahoma state law makes no anti-discrimination provisions for the protection of trans people.