Back to black: rainbow crossing removed

Sydney’s popular rainbow crossing at Taylor Square has been removed, with the state government following through on its decision to tear up the colourful display over safety concerns.

Independent Sydney MP Alex Greenwich (pictured left) let fly on Twitter during the crossing’s removal on Wednesday night with a number of sensational claims, including that the roadworks were a “surprise attack”, an “aggressive act” and that NSW roads minister Duncan Gay governs “by vendetta”.

Greenwich also released a statement calling for NSW Premier Barry O’Farrell to apologise for the removal.

“It’s one thing to call for the removal, but to divert RMS crews under the guise of emergency road works is an aggressive act that Sydneysiders will not forget,” Greenwich said.

“Local businesses, residents, and the City of Sydney Council were not given any notice. This even surprised the RMS crew who at the last minute instructed to remove the crossing

“The Premier must apologise for this aggressive act against both Sydney and the LGBTI community.”

The deadline for the crossing’s removal expired on April 1. At the time, a City of Sydney spokeswoman told Star Observer that the council was complying with instructions issued by the RMS and that the crossing was likely to be removed “quickly”.

Gay and O’Farrell rebuffed repeated entreaties from the council and Greenwich to allow the crossing to remain or to defer its removal until its popularity and safety could be more comprehensively assessed.

An online petition started by Greenwich to keep the crossing gathered almost 15,000 signatures.

A spokeswoman from Gay’s office confirmed that the crossing was going to be removed – initially in the first week of April – and stood by the decision, claiming it was for safety reasons.

“City of Sydney Council carried out a safety evaluation of the trial, and identified unsafe pedestrian behaviour including people lying on the road to take photographs. This behaviour warrants removal of the markings,” the spokeswoman said.

RMS had offered to work with Sydney Council on ways to bring the rainbow motif back to Oxford St in ways that “do not compromise road safety,” such as painting footpaths, benches and traffic light control boxes.

Gay raised the issue of road safety in March and compared the LGBTI community’s use of the rainbow as an emblem with the colours of a football team.

“When you approve something in a colour, you approve a political statement and if you allow colours for one thing, you leave yourself open for many others. Well-known sporting teams may want a crossing as well – we could have red and green for the Rabbitohs, maybe,” he said.

“I’m not saying that it’s wrong to have a political statement for Mardi Gras, but our key prerequisite is to maintain road safety.”

Gay also criticised City of Sydney for pushing ahead with the project after it approved a $35,000 budget hike on the project on the night of February 25 to pay for the crossing’s removal at the end of March.

“We approved a rainbow crossing at Oxford Square [sic] as a trial – I am a generous man. We indicated to the council at the time that we were willing to pay for a rainbow crossing on the footpath, but they didn’t want to do that and now they’ve decided to blame everyone else but themselves,” he said.

The one-month instalment to commemorate Sydney Mardi Gras will come at a cost of $110,000 to City of Sydney ratepayers after the extra $35,000 was slated for the crossing’s removal in February.

OPINION: A wasted fight on the rainbow crossing?

Previous post Uruguay marriage bill passes, will be made law 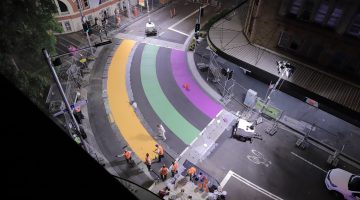