Back to the future: HIV researchers seeking 1980s levels of community input 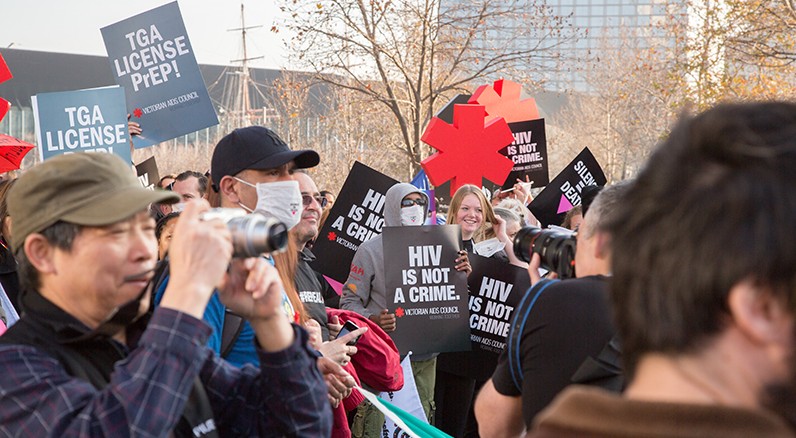 Some of the banners at an anti-stigma rally held during AIDS 2014 in Melbourne. (Supplied photo)

ONE of Australia’s leading HIV research bodies is hoping for a return to levels of partnership with the LGBTI community not seen since the height of the AIDS crisis.

However, the organisation says it needs people to come forward to help it communicate its work in an era when people are more used to Facebook than working groups.

Advertisement
The Kirkby Institute, based at the University of NSW in Sydney, says it’s on the lookout for LGBTI people to give their opinion on how it talks to and with the community.

The Institute, which specialises in HIV, viral hepatitis and other blood-borne and sexually transmissible infections, is also reaching out to community organisations that might be able to communicate future research outcomes.

Kirby Institute Associate Professor Garrett Prestage said the research response to HIV sprung from the communities most at risk, such as gay men.

“The natural approach was one of collaboration and partnership and response to community need,” he said.

In the early 1980s, when Australian research into HIV was in its infancy, key doctors and representatives of community organisations joined forces to set up a study of gay men in Sydney.

“It was reassuring, because doctors and the community were working together,” Prestage said.

The results of the study were globally influential and led to the formation of the research centre that would later become known as the Kirby Institute.

Kirby Institute president Professor David Cooper said while the organisation has long held working groups, the growth of new communication methods such as social media meant they had to rethink how they engaged with the community.

“To help ensure our research remains useful, and directly beneficial to the changes in at-risk communities, we hope to get as many ideas as possible from everyone who is interested in our work,” he said.

Positive Life chief executive Craig Cooper said: “The HIV response in NSW and Australia has always been based on a coalition of partners working to build and implement evidence-based approaches and maintaining community engagement as we work to tackle this virus.”

The consultation kicks off next year and will involve a mix of face-to-face meetings and online engagement.

To participate in the development of the Kirby Institute’s Community and Stakeholder Engagement Strategy, email [email protected]

Next post Big weekend of LGBTI pride events around Australia