"It’s never been an issue and I’ve always been open about it." 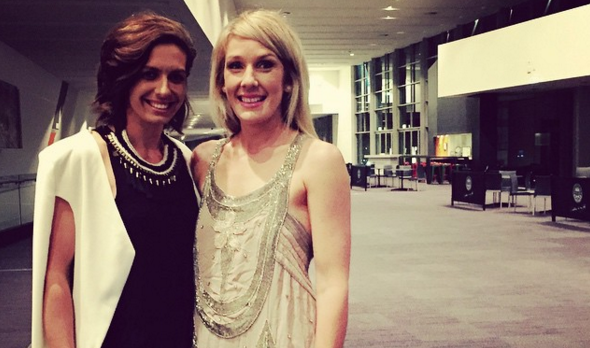 ASHLEIGH Brazill has a positive message for young same-sex attracted sportswomen: her sexuality has never been an issue on the netball court.

The news comes as the Diamonds star and West Coast Fever captain celebrated a civil union to her partner Brooke Grieves last weekend amid friends, family and teammates.

“Not once in my career has someone said something, either on the court or off it,” the 26-year-old Perth-based netball player told the Guardian Australia.

“It’s never been an issue and I’ve always been open about it.”

Sitting back with my WIFE @brookebrazill reflecting on our AMAZING WEDDING!!!!! Our wedding day was absolute perfection!!! Thank you isn’t nearly enough to everyone who was involved in the day… My wife and I are pretty bloody lucky to have such amazing friends and family. #brashbrides #bestdayever #margs #PearlRiverHouses And No words for these legends @lensman_dan @_rci @thezestgroupwa @supperroad + our DJ T!! #winningformula

Brazill’s experience is a contrast to the findings of last year’s Out On The Fields report, which investigated the frequency and consequences of homophobia in sport.

The report found 80 per cent of respondents — gay or straight — had witnessed or experienced homophobia.

One of those was Alex Blackwell, Australia’s most-capped female cricketer, who heard discouraging remarks about lesbians in sport even at the elite levels of the game.

RELATED: Taking a Stand in the Stands

“It absolutely matters to young kids struggling with their sexuality to see gay people at the elite level,” he told the Guardian Australia.

“Ash being open about who she is makes her a role model, whether she likes it or not.”

However, Brazill was hesitant.

“I certainly don’t see myself as a role model for gay people or anyone else for that matter, because I just do what I do, but if people see me that way, then that’s great,” she said.

Days after celebrating her civil union, she took a similar attitude on marriage equality: “Sure, I hope one day it’s legal, but there’s no law in the world that would be able to stop us being together.”

Thank you for everyone’s support and kind words for my debut against NZ. The last week has been amazing hanging out with such a great bunch of girl. #AusVNz #AustraliaDiamonds A big shout out to all the Perth Crowd last night. You guys never disappoint. Love you all. #PerthFamily

RELATED: Taking a Stand in the Stands