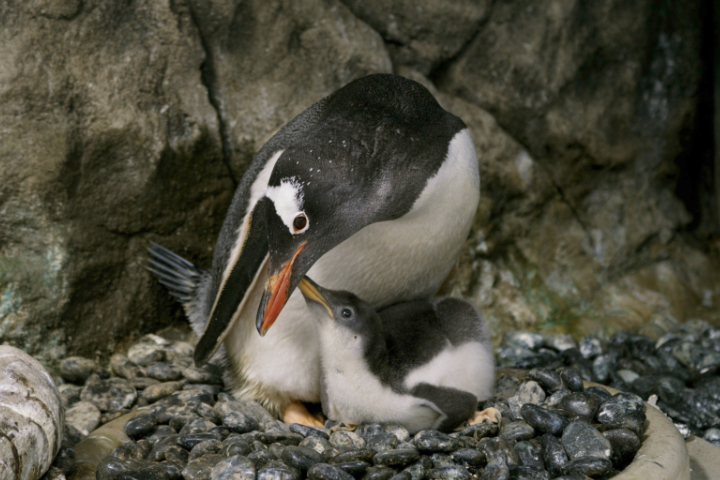 Sphen and Magic, SEA LIFE Sydney Aquarium’s gay penguin couple, have become parents for a second time. The couple first gained world-wide fame in 2018 when they adopted an egg and raised their first child Lara. They have now successfully hatched another egg together.

The folks at SEA LIFE Sydney Aquarium were naturally delighted when they shared this news with Star Observer.

“If one of our pairs has too many eggs or are not good at looking after their eggs we will sometimes foster these eggs out to other pairs like Sphen and Magic. We gave Sphen and Magic an egg to incubate as they have proven to be good parents in the past,” said a spokesperson.

Sphen and Magic’s second child arrived along with other Gentoo Penguin babies that privately hatched in the aquarium’s Sub-Antarctic Zone over the past month. “We are beyond excited to welcome the new penguin chicks to our colony. They are doing really well and gaining weight. They started at around 95 grams, now our oldest is almost 2kg and the youngest is sitting at around 399 grams,” Kerrie Dixon, Sea Life Sydney Aquarium’s Penguin Supervisor said in a statement.

The aquarium’s only same sex couple Sphen and Magic had first grown close to each other in 2018 and became an inseparable couple during the breeding season. The aquarium’s staff that look after the penguins were witness to Sphen and Magic’s budding relationship as they took swims together in the colony. When breeding season arrived, the couple started collecting stones to build their nest. Naturally, the gay penguin couple had the best nest – one with more pebbles than other couples in the colony and the neatest one to boot.

Advertisement
The staff first gave the couple a dummy egg, which they lovingly cared for. Impressed with their parenting skills, the staff then gave Sphen and Magic the chance to foster an egg from another couple that had two. They successfully hatched the egg in October 2018 and baby Sphengic, later renamed Lara, was born.

The aquarium spokesperson revealed that same-sex couples and courtship were a lot more common in nature than most people realise.

“Penguins, including Gentoo Penguins, are among the many species in which male-male or female-female pairing occur frequently and we are fortunate to have our own male-male pair – Sphen and Magic – here at SEA LIFE Sydney Aquarium. Just like our other Gentoo parents, Sphen and Magic are attentive and incredibly caring and we feel privileged to have such an amazing duo in our colony.”

Sphen and Magic in fact turned out to be amazing parents to their adoptive child Lara.

“Lara is now two years old and surprising us everyday with how independent she is. Despite still being relatively young, she attempted to take part in this year’s breeding season. She and her partner set up a nest and carefully watched over it but unfortunately weren’t successful in hatching an offspring. We look forward to seeing how she goes next year and whether she’ll give Sphen and Magic a little grand penguin chick.”