AUSTRALIA is becoming a nastier and meaner country under the Abbott Government, but queers are not the target. Indeed, while we lag behind most comparable countries in achieving same- sex marriage, the biggest abuses of human rights in Australia are clearly directed towards asylum seekers, where the government is determined to “protect our borders” at any cost.

The major domestic obstacle to full acceptance of sexual and gender diversity is the continuing truckling to religious prejudices, highlighted when Tony Abbott gave an election address on education at a Christian school that preaches homosexuality is an abomination. I don’t think that Abbott himself is homophobic, but he and his government are unlikely to challenge the various exemptions that religious institutions and leaders still enjoy to preach bigotry.

But on a global scale Australia rates high on what the guides used to call “gay friendly”, and what has been most dramatic over the past year is the increasing polarisation between countries where sexual and gender diversity is increasingly accepted, and those where it is actively persecuted.

On the Pew scale of social attitudes, Australia ranks in the top 10 countries for acceptance of homosexuality, whereas in much of Africa and the Middle East over 90 per cent of those polled founnd homosexuality unacceptable.

In our region measures of acceptability range from high rates in Australia and the Philippines [despite the strong opposition of a very powerful Catholic Church] to deep hostility in major Islamic societies.

There are no figures given for India, but the recent decision of the Indian Supreme Court to overrule a previous decision to abandon colonial laws against sodomy marks the deep divisions within the country. The Indian case has a particular significance, because as Michael Kirby has pointed out, the Indian legislation is a model for laws that still exist in 40 countries of the Commonwealth.

Advertisement
When the Australian gay and lesbian movement began in the early 1970s, our emphasis was almost entirely on domestic issues. It is hard for a younger generation to have any real understanding of the extent to which we were trapped in overlapping perceptions of ourselves as sinners, deviants and criminals, or how much has changed in the past few decades.

We are not good at remembering our own history; the drowning of Dr. Duncan in Adelaide in 1973, which led to South Australia becoming the first state to decriminalise homosexuality, and the hard work of early campaigners for law reform are less known even to young queer activists than is the mythology of Stonewall.

Much still remains to be done, but today even mainstream conservatives who oppose same-sex marriage are careful to stress they accept the validity of homosexual relationships [unawareness of the complexities of transgender and intersex issues are more problematic]. The biggest challenge for our movement now is to think through how we can support people facing violence, persecution, “corrective rape” and sometimes death for their sexual/gender identities in other parts of the world.

Over the past few years the Obama administration has taken this up as a major human rights issue, symbolised by their choice of Billie Jean King to lead their delegation to the Sochi 2014 Winter Olympics next month. As far as I know, no equivalent position has been adopted by the current Australian government, though their predecessors were quietly supporting moves to include sexual and gender identities within the human rights work of the United Nations.

Strident statements of indignation by western leaders are not necessarily helpful, and in some cases will only increase persecution in countries where political homophobia is used to mobilise national and religious fundamentalisms, such as in Russia, Uganda, and much of the Arab world. But quiet support for activist groups in these countries and the inclusion of sexual and gender identities in all discussions of human rights can be effective.

The very concept of “Australia Day” grows out of an old-fashioned idea that national identity is the most central way in which we define ourselves. It is time for our movement to make thinking beyond our borders central, and find meaningful ways of drawing attention to the ongoing persecution and violence faced by so many who live in countries which have actively rejected the changes in attitudes to sexuality and gender that we have experienced.

In doing so, we can both highlight what has changed and what remains to be accomplished.

Abbott is cruel and confused on those fleeing persecution – Christine Milne

About the Author Dennis Altman

Dennis Altman is a Professorial Fellow in Human Security at Latrobe University. He is better known as the author of 12 books, most recently "The End of the Homosexual?" 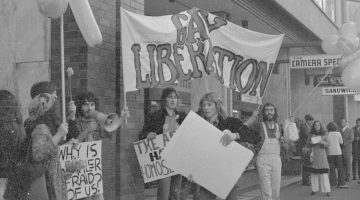