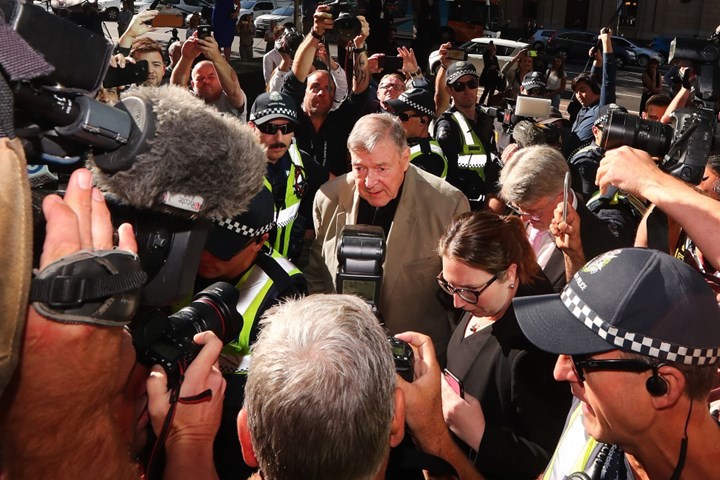 On December 21 of last year George Pell was convicted of one of the most heinous of crimes, that of child sexual abuse.

His acts, and the scope of his hypocrisy, have left both the victims and the collective breadth of Australian society, reeling.

While serving as Archbishop of Melbourne in the mid 90s he sexually assaulted two choir boys at St Patrick’s Cathedral, exploiting his position of authority in order to satisfy his gross, sexual desires.

This was not even the first allegation against him but it was the first to be proven in court.

Many have expressed outrage, not only towards Pell as the perpetrator, but toward the Catholic Church, for its continued denial and providing safe harbour for the monsters who lurk among its ranks.

On August 21 this year, The Victorian Court of Appeal ruled to uphold Pell’s convictions. His defence council will next lodge an appeal in the High Court of Australia, as a last ditch attempt to have his charges overturned. If granted it will most likely be heard early next year.

Not only have Pell’s physical actions left a trail of carnage in their wake, for decades he fought against the rights and liberties, which our community were denied for far too long.

It is undisputed that Pell is the face of religious intolerance in the Australian Catholic Church.

In 1990, he acknowledged that homosexuality did exist, but said “for the good of society it should not be encouraged.”

In 1998, he refused communion to members of the Rainbow Sash Movement when they attended Mass at a Melbourne cathedral.

It is impossible to ignore that the Catholic Church, along with other religious bodies, are powerful commodities within the context of Australian society.

Their influence and sway on our current political climate, evident in the on-going government funding of private religious schools, and the instigation of the School Chaplaincy program are two examples of this.

The footage released of Scott Morrison attending a Pentecostal church service amid the 2019 Federal Election campaign, is another.

With the waters having become so murky and the lines between civil liberties and religious freedom blurred, the stakes for our community have never been higher.

I spoke with Dr Francis Donovan, the Vice President of Acceptance Melbourne, a group which supports members of our community who identify with the Catholic faith.

“Cardinal Pell, one-time Archbishop of Melbourne, then Archbishop of Sydney and since one of the highest-ranking prelates in the Vatican, has never been a supporter of LGBTIQ+ recognition or acceptance within the Church. On the contrary, he has been most public in his opposition to and rejection of our full and public participation in the life of the Church,” Dr Donovan said.

“Acceptance Melbourne, alongside the current Catholic Archbishops of Melbourne and Sydney, urge all Catholics to accept the outcomes of due legal process in the case of Cardinal Pell, with sobriety, humility and the deepest respect for our legal institutions.”

Given the nature of Pell’s crime and victims, it could rightly be argued that his rejection of our community is based as much on the Catholic Church’s stance on homosexuality as it is on his own sense of internalised homophobia.

Of course, simply accepting the outcomes handed down by our justice system does little for the survivors of child sex abuse. The damage which has been inflicted by the Catholic Church is a sad indication of a much broader culture centred upon institutional abuse which, until the 2017 Royal Commission into Institutional Responses to Child Sexual Abuse, went relatively unchecked.

“Some of things which have come out of the Royal Commission into religious institutions should have been enough to send people running, but instead we’re now rushing to try and protect them,” says Ali Hogg, co-founder of Rainbow Warriors, and well-known marriage equality activist.

“People still think they can use religious institutions to discriminate.”

In 2006, Pell opposed legislation supporting the rights of adoption for same sex couples, going so far as to say that racial and sexual discrimination was ‘incomparable’.

Then in 2009, Pell delivered a speech in which he declared, “[Religious] exemptions are now being refused or defined in the narrowest possible terms in new anti-discrimination measures, and existing exemptions are being eroded or ‘strictly construed’ by the courts.”

With the Federal Government’s draft bill on Religious Discrimination looking more than likely to pass into law, the Catholic Church and individuals such as Pell could soon be placed in an even greater position of power, able to discriminate against individuals, not only from our community, but against many others as well, all time hidden behind the thin guise of so-called “religious freedom”.

“Within a month of us winning the postal survey, the Government decided to put in a religious freedom inquiry, we knew this would only lead to them putting forward, more bills that will further discriminate against us,” adds Ali Hogg.

“It was because of our resounding win that they needed something to appease the conservatives, and in each of the three draft bills we have had our own worst fears realised.”

Many are expressing grave concerns towards the potentially damaging effects of the bills.

Recently, the Law Council of Australia issued a warning that if this bill were to pass both Houses of Parliament,  it could result in the legalisation of race hate speech.

Labor front bencher Tanya Plibersek has joined a growing chorus, expressing concerns about how these new laws will, in effect, override State anti-discrimination legislation. But it is the effects this Bill will have on the health and wellbeing of our community that is most alarming.

“In terms of the health sector, this bill will affect so many, particularly LGBTIQ people, women who want or need access to birth control, or people who want access to PrEP, for instance. In rural areas, where there’s only one practitioner, and maybe a conservative or religious one, this will really increase the chance of individuals not being able to access services or being discriminated against.” Ali Hogg says.

Acceptance Melbourne express similar concerns, with Dr Francis Donovan adding, “One thing that will be potentially hazardous to transgender persons, is clause 8(5) which allows for conscientious objection by medical and health care practitioners.”

“Where an employer requires a practitioner to provide a particular service to a transgender person, to which the practitioner objects on religious grounds, the requirement could be unreasonable and therefore discriminatory. This potentially can put at risk the health and safety of the transgender patient concerned.”

“This idea that all of a sudden, someone can decide, upon their religion within a secular setting, that they no longer need to provide a health service, is ludicrous,” Goldner told the Star Observer.

“The effect that this Bill will have on transgender and gender diverse individuals can only be negative, and it also has the potential to undo lots of antidiscrimination law, not just in relation to gender identity, sexual orientation and sex characteristics, but single mothers would be damaged, people with disabilities too, and for women’s issues it’s a disaster.”

Both Pell and the Catholic Church vehemently denied the effectiveness of condoms in combating the AIDS epidemic in Africa, saying that “Condoms are encouraging promiscuity. They are encouraging irresponsibility.”

We must not forget, that when George Pell declared that “God made Adam and Eve, not Adam and Steve,” he did so, not only as a senior religious figurehead but also as a child rapist.

Pell’s comments and actions are indicative of the type of religious bigotry Prime Minister Scott Morrison wishes to protect- despite section 116 of the Australian Constitution explicitly preventing the Commonwealth from imposing any religious observance.

Of course, Pell has received support from other former, Liberal Prime Ministers with John Howard, having provided a glowing character reference amid Pell’s court hearing and Tony Abbot in the wake of the courts convicting Pell of child sex abuse, declaring that “it certainly doesn’t sound consistent with the man I have known”.

“I think the Catholic Church has sadly trashed its brand of any moral authority,” Sally Goldner concludes, “And I say that with total, infinite respect to the survivors of abuse and their families.”

“The double standards that they have, when they talk about freedom of speech, but think that their confessional should be sacred, to the point of covering up issues of children being abused.”

George Pell is the face of religious intolerance and in light of the damage that has been inflicted by Religious institutions both historically and within the contemporary, it would make for a frightening reality, to see Australian society become fully indoctrinated by the church.

How dare we allow a monster, such as Pell to determine those rights our community is entitled to?

Or allow Religious organisations to constantly dictate to the mainstream, a narrative that will inevitably always paint us as the lesser?

That the hypocrisy of this man who has made others suffer such unmeasurable trauma, should be lorded and held above us, is a sickening thought.

But somehow, in the year 2019, this is the dangerous crossroads that Australia now find itself approaching.

Pimp Your Palace: Terrific Tips To Rejuvenating Your Living Space