RAPID growth in Australian capital city populations has been a seemingly unstoppable long term trend over the last twenty years. Traditional heartlands of the Australian gay and lesbian community are now epicentres of booming population growth, and epitomise the rapid cultural shift towards high-rise apartment living.

According to the latest figures from the Australian Bureau of Statistics for January 2016, the total number of new apartments being approved for building construction has declined throughout 2015, with a 14% reduction in apartments approved year on year. This means overall across Australia, couples seeking to buy into new off-the-plan developments face a reduced selection of quality apartments.

Romany Brooks is a property sales agent at BresicWhitney, and a volunteer fundraiser for the Bobby Goldsmith Foundation. Ms Brooks has many years of experience helping gay and lesbian couples purchase apartments in inner-city Sydney.

When the Star Observer asked Ms Brooks what factors she felt were most important for gay couples looking to buy their perfect owner occupier apartment, she observed that while location is always important, connecting buyers with properties that reflect their lifestyles is the key.

Ms Brooks said, “Buyers aren’t necessarily looking for specific suburbs any more. They often have a fixed budget and are looking for the best lifestyle within their budget. People want quick and easy public transport to the city, nearby parks, gyms and cycle paths. It is also very important these days for there to be a hip café serving great coffee within a 5 minute walk of the building. Properties that tick these lifestyle boxes usually achieve far better capital gains in the long run.” 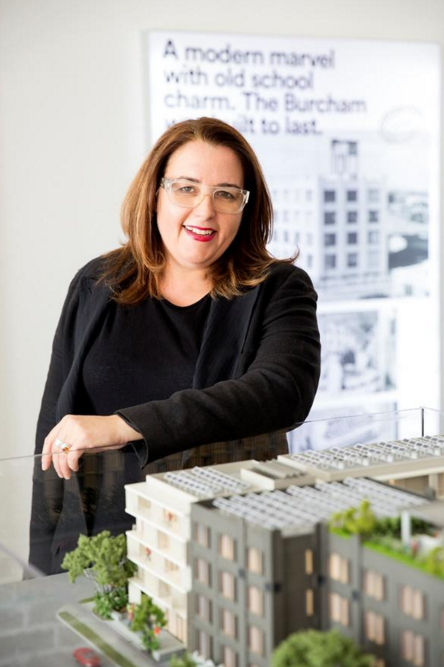 One area of the property market that is expected to remain strong over the next few years are inner-urban conversions of heritage and commercial sites, particularly those located near parklands and transport. In Melbourne, small inner-urban micro factories have been popular for conversions into single residences, with many winning architectural awards. But in inner-city Sydney, larger commercial sites with heritage features have been the focus for apartment conversions.

The Watertower in Sydney’s Redfern is an apartment conversion that Ms Brooks cited as a prime example of how a property’s heritage and lifestyle features can lead to good investment returns for owner occupiers. Redeveloped in 1984, the large heritage site was originally built in 1903, and housed McMurtrie’s Shoe Factory. The redevelopment retained large windows, generous proportions, exposed timber beams, and has been extremely popular right from the outset with owner occupiers. According to property pricing site OntheHouse.com.au, capital growth has been strong at The Watertower, with one 2 bedroom apartment changing hands for $417,000 in 2006, $750,000 in 2010, and $950,000 in 2014.

According to Ms Brooks, “Better cycle paths and transport links, and the influx of small cafes and businesses that have followed the apartment boom have really turned inner-city Sydney into a city of villages. Twenty years ago most people considered Redfern and Alexandria as areas that were off-the radar, you might buy an investment property there, but you certainly wouldn’t want to raise a family there. These areas have now dramatically changed, and are now dominated by gay couples and young professional families with children. The change of lifestyle within these areas has lifted prices. Gentrification and urban renewal have now expanded the zone of hip inner-city Sydney suburbs to include areas like Roseberry, St Peters, and Dulwich Hill.”

The Burcham apartments in Rosebery, currently being developed by the Stable Group, incorporates a landmark heritage factory building, originally designed for the Wrigley chewing gum company in 1918. Adapted by architects Allen Jack+Cottier to suit the lifestyles of owner occupiers, it retains very high ceilings, beautiful heritage columns and architectural features, sharing a design ethos with the earlier Watertower development in Redfern.

The landmark Burcham site combines the very latest innovations in apartment complex design while retaining and enhancing the heritage structures. The complex includes high-tech eco-features designed to reduce water usage and energy costs. Innovative features such as biometric security access, solar energy, electric car charging, water harvesting, and under floor heating are integrated into the development. Residents will be able to enjoy a rooftop outdoor cinema and BBQ, as well as a communal vegetable patch for residents who want to indulge in some gardening.

Historic architectural features are combined with ultra-modern layouts and fittings Shopping With Ease Thanks To Klarna