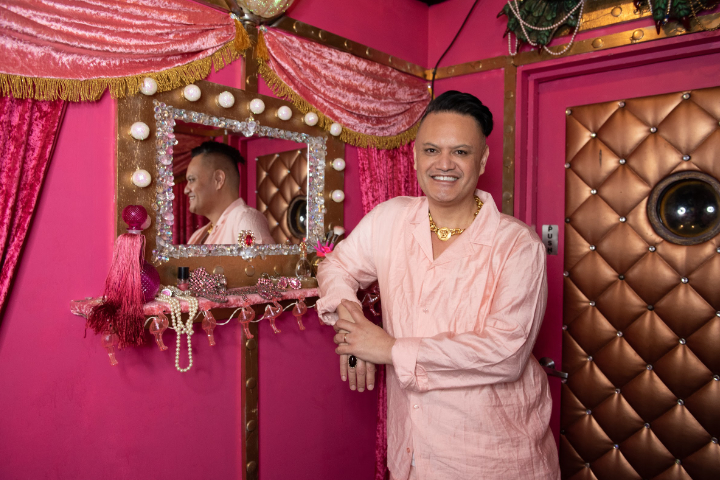 Richard Taki, otherwise known as Bumpa Love, started Vau d’vile Drag Cabaret Restaurant in Fitzroy just over three years ago as a way of giving employment to local Drag Artists. In the time since, the business has grown a loyal following, and though COVID-19 has of course impacted the business, it has done little to dampen Richard’s spirit.

“I think because I am an artist I am used to adversity, and I’m a minority culture, and I’m not in my own country, so it’s just another thing to get on with really.” Richard tells Star Observer, “The biggest impact on the business has been financially. We went from having an income to literally going to zero dollars for at least two months.”

And on how the business has adapted over recent months Richard continues the interview by saying, “The girls wanted to keep working, artists have egos and anxieties and drag queens are no different. So, it was a reality check for all of us.

“We’ve gone online and done some shows, but the income from that has only been about two percent.

Advertisement
“The whole online thing is superficial, but after running the same shows for over three years it gave the team something else to focus on.

“With our restaurant licence we were able to alter it to offer take away – it was hard because our kitchen is tiny – it hasn’t really kicked off because we are not a well-known food venue – but at least we tried to get some income in.”

Richard added, “I can’t wait till people are able to get out and be with each other again, laughing, celebrating and being together as a community – that’s what we are about.

Speaking to Star Observer prior to the reintroduction of stage three restrictions Richard said, “We’ve been lucky to have people in over the last three weeks, and audiences have had a fantastic time.”

As the restrictions now return Vau d’vile Drag Cabaret Restaurant will once again be shifting to online, streaming performances.

“We will be going back to live streaming every Friday and Saturday night as we have been doing for the past 15 weeks,” said Richard in an update.