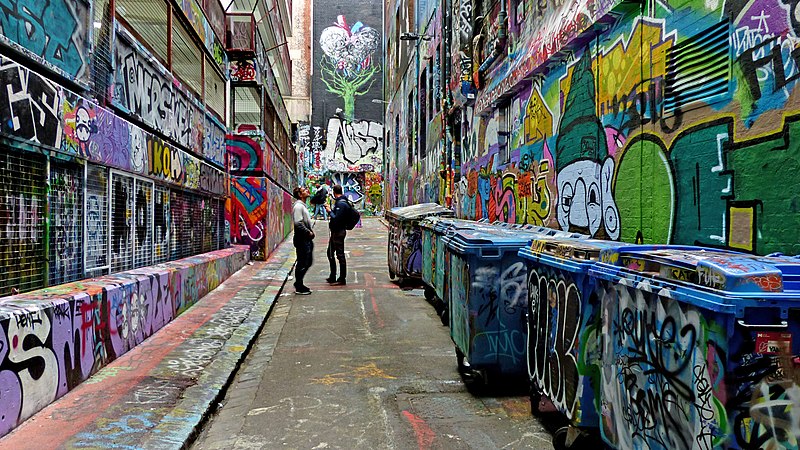 What’s the difference between street art and graffiti?

For the past two weeks Melbourne has been gripped in a debate that may well be “peak Melbourne” after a group of young graffiti artists paint-bombed world-famous street art destination Hosier Lane.

Hosier Lane is a major tourist attraction and while some applauded the paint-bombing as an artistic act of protest others have condemned the group. Melbourne Lord Mayor Sally Capp called the paint-bombing “vandalism at its worst” and “not the sort of behaviour we will have in the city.”

Police have again requested help from the public to identify the group of young men who spray painted many of Hosier Lane’s murals using fire extinguishers.

To help understand the context of the incident Star Observer spoke to arts writer and broadcaster Richard Watts, who explained there has long been tension between graffiti artists and street artists.

Watts was supportive of the paint bombing, saying:

“When council says this is vandalism, it’s a disruption of capitalism ideology. I’m happy to see it happening.”

Watts noted that queer art, fashion, and culture have often been co-opted by the mainstream, who then shed elements that may not appeal to large-scale audiences.

“There is such a long history of queer and independent art forms being co-opted and commodified for mainstream audiences,” said Watts.

And that commercialisation often changes the work itself, according to Watts.

“When it gets commercialised, often works get sanitised and the queerness gets taken out. The complexity gets taken out of work to sell it to a broader audience. That complexity includes sexuality and expressions of sexuality.”

Asked about the Council’s decision to call in the police, Watts highlighted a tension in Melbourne City Council’s position.

“They say, “come and experience our street art culture, look at how radical and exciting Melbourne is,” he noted.

“Well, when they get an actual example of street art that doesn’t fit into neat little boxes set out by the powers that be, this is how they react.”

Adrian Doyle, a street artist who in 2013 painted the entirety of Hosier Lane blue (with the cooperation of the Melbourne City Council) as part of his work “Empty Nursery Blue” also supported the paint-bombing.

Doyle spoke to the Star Observer on the phone while he was 40 meters in the air on a scissor lift working on his latest project – painting a mural on a grain silo in Queensland.

He has strong views around what is considered art and who should be the custodians of public art.

“It isn’t vandalism, they’ve got people talking about something important. We’re very close to losing a lot of street art through gentrification. There needs to be better management of the laneway, it needs to be managed by an artist not a bureaucrat.”

Asked about the police getting involved Doyle suggested they should “let it go, man, it’s just a bunch of arts students making a statement. Don’t worry about who did it. Worry about why they did it.”

But to many Melbournians, the Hosier Lane paint bombing is exactly what art should be, as Richard Watts says: “Art is dangerous. Art cannot be controlled. It should be confronting and radical and shocking and we should be celebrating that rather than shutting it down.”