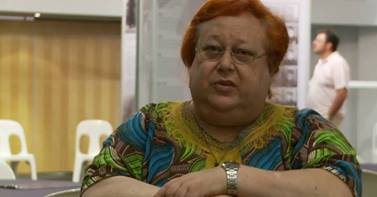 Advertisement
REGARDED as influential in the global intersex movement, South African activist Sally Gross has been remembered as a courageous and ground-breaking campaigner for human rights and against racism.

Gross died, aged 60, at her Cape Town home on February 14 following an illness.

She was born intersex on August 22, 1953 to Jewish parents but would later convert to Christianity and become a Dominican priest.

Organisation Intersex International (OII) Australia president Morgan Carpenter told the Star Observer that Gross was a hugely important figure in both the intersex movement and the campaign to remove apartheid in South Africa as well as being active in the continuing debates surrounding Israel and Palestine.

“A courageous and ground-breaking campaigner, who felt the rejection of the church of which she was an active part, Sally will be missed also for her warmth, gentleness and spirit,” Carpenter said.

Classified male upon birth despite being sexually ambiguous, Gross was given the name Selwyn but was made aware of her anomalies throughout her life. It was at age 40 that Gross was formally diagnosed with an intersex trait which lead her to transition to female between 1992 and 1995.

A noted figure in the anti-apartheid movement in South Africa, Gross had originally fled the country in 1977 on the advice of colleagues from the African National Congress (ANC) that was led by future president Nelson Mandela.

Gross would eventually move to Israel, where her parents had settled, and gain citizenship before then leaving for the UK where she entered the Dominican Order and was ordained a priest at Blackfriars, Oxford. She also gained a masters degree at Oxford, and became a Philosophy Don, teaching moral theology and ethics.

In 1987, Gross was alongside former South African president Thabo Mbeki as a member of an ANC delegation to Senegal that played an important part in eventually dismantling apartheid in South Africa. In 1990, the Dominicans invited Gross back to South Africa to teach, but she was stripped of all clerical status and had her religious vows annulled when she decided to identify as female.

The persecution by the church led Gross to become South Africa’s foremost voice for intersex rights.

In 2000, Gross secured the first known mention of intersex in national law, with the inclusion of “intersex” within the definition of “sex” in the anti-discrimination law adopted by South Africa.

Since then, she helped to draft legislation on the Alteration of Sex Descriptors, and the Promotion of Equality. Gross also helped establish Intersex South Africa, which is an associate organisation of OII. In recent years, she participated in the first International Intersex Forum, held in Brussels, 2011, as well as being an active online presence on intersex support and advocacy forums right until her final days.

“In a sense, the intersex community became her congregation, where she continued to live out her vocation, and where she was surrounded by people she loved right to the end. We were very lucky to have known her. Even towards the end, Sally was more concerned about others than herself, but she was very grateful for all the work being done by those trying to find ways to help and support her during her last days,” Carpenter said.

“For so many of us in this community, who knew her in the flesh or online, it is very sad that she has passed away like this; she was a gentle and yet powerful person, one of life’s great souls, a very spiritual person, someone who did not judge, looked for the best in people, and was always more interested in others than herself. Such people are rare, and a privilege to know in any capacity. We were blessed to have had her as part of this community, and she is a treasure who will be sorely missed.”