"There are words so poisonous with historical violence and persecution they’re no longer acceptable in public discourse." 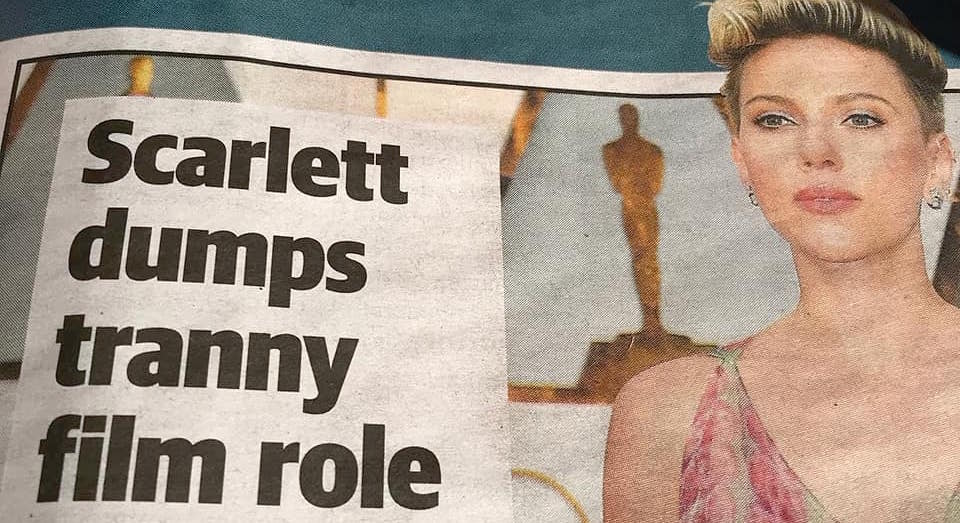 News Corp’s The Daily Telegraph has drawn outrage on social media after using a transphobic slur in a headline in its Sunday edition.

The headline appeared in a Sunday Telegraph story covering the backlash to Scarlett Johansson’s casting in a film where she would play a trans man.

Advertisement
Johansson dropped out of the project after listening to criticism from the trans community and trans actors, which the Tele interpreted as “Scarlett dumps tr***y film role”.

Photos of the article, on page 83 of the edition, were taken by Samuel-john Dillon and first circulated on Facebook by JOY 94.9’s Jordan Johnny Johnstone.

Game developer and radio presenter Sav Ferguson then shared the images on Twitter, where they went viral and drew outrage.

“What the FUCK made you think this was an acceptable thing to print?” Ferguson tweeted. “IN WHAT WORLD IS THIS OKAY?”

Writer Benjamin Law labelled the headline “truly vile”, and said “if you work in a media culture that thinks this is fine and dismisses anger over this as hypersensitivity, you work in a place that regards some people as less than human.”

Change.org Executive Director Sally Rugg tweeted, “There are words so poisonous with historical violence and persecution they’re no longer acceptable in public discourse.

“They’re traumatic for the people once labelled with those smears, and we are meant to be better than the past they come from.”

Seriously @dailytelegraph??? Like, actually? Two sundays in a row you’ve printed vile, transphobic rubbish. Replace that word with another similarly racist or homophobic term and see if it makes it to print. This is never ok, it’s appalling, and the editor needs to be sacked pic.twitter.com/f2TgPjhXvv

“The level at which trans people are so willingly publicly vilified by those with a privileged, high profile platform is unfathomable.

“48% of trans people have made suicide attempts, if this behaviour continues, count yourself partly responsible for these unnecessary deaths,” Mouncey said.

Ferguson was initially concerned that the images may have been doctored, but photos from other users confirm the headline is real.

So, Sunday Telegraph obviously didn’t get the memo on words we no longer EVER use…… pic.twitter.com/fFJK6t8MGp

Complaints against The Daily Telegraph were upheld by the Press Council last year after an infographic in the paper implied that being LGBTI is a health problem.

The newspaper was also under fire last week for allowing a Miranda Devine column to go to print in which she wrote that trans women are “culturally appropriating” womanhood.

The Victorian Equal Opportunity & Human Rights Commission has guidelines for reporting on gender identity which state that the slur should never be used.

Johansson had signed on to play a trans man in an upcoming film entitled Rub & Tug, but dropped out of the project after backlash from trans people and the wider queer community.

Writing for them, Meredith Talusan said, “Now that trans people are in a better position to speak for ourselves in society, let’s make one thing clear: it has never been ethically or politically justifiable for cisgender people to play trans roles.

“And as long as we live in a society where trans people see a fraction of the opportunities afforded to cis people, it will continue to be deeply unjust when cis actors steal parts from trans talent.”

Most recent films starring cis actors in trans roles, such as out actor Matt Bomer in Anything, Michelle Rodriguez in The Assignment, and Elle Fanning in 3 Generations, were critical and commercial failures.

Last year, A Fantastic Woman – which starred trans actress Daniela Vega – won the Best Foreign Language Film Oscar, and the U.S. TV series Pose, which stars the largest cast of trans performers ever on a series, has drawn raves and has been renewed for a second season.