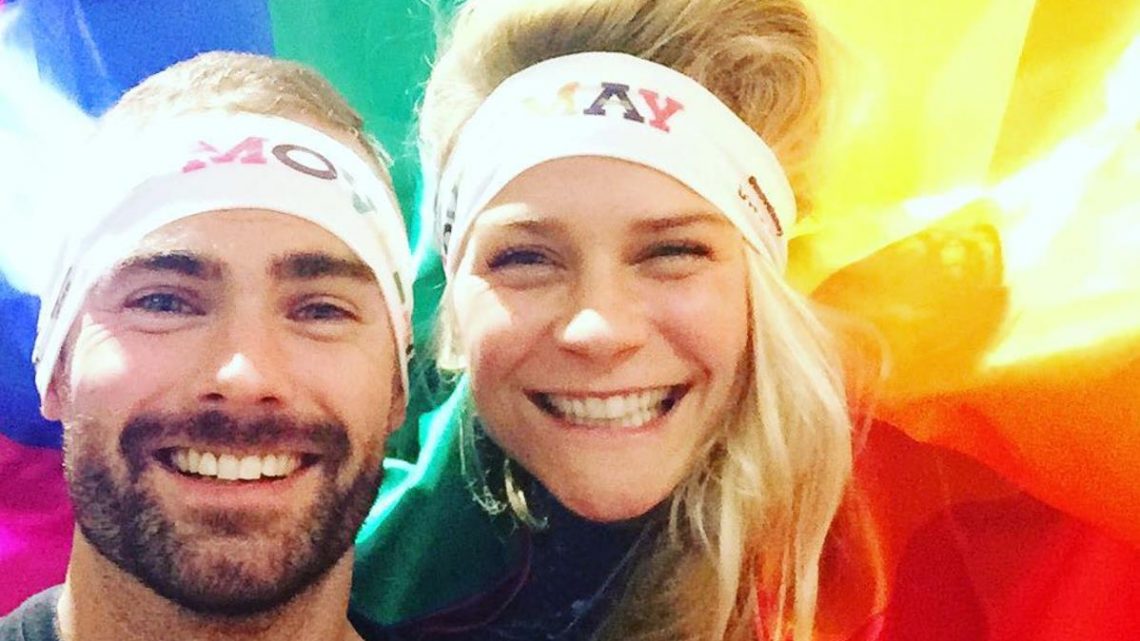 Brent and Angie Greene are related to sporting legends, but had very different experiences watching from the sidelines. Matthew Wade spoke with the pair about changing Aussie sporting culture one team at a time.

Brent Greene grew up with sport in his blood.

His brother Steven played football for the Hawks, his father Russell was a longtime decorated AFL legend, and his grandfather was Grand Slam tennis champion Frank Sedgman.

Advertisement
Greene himself was a stellar athlete, but withdrew from team sports at an early age because of the rampant casual and overt homophobia he would hear around the field.

“I heard some parents say that their own kids were playing like ‘poofters’,” he recalls.

“So I withdrew from team sports and developed a position against the AFL – because when I went along to games I always feared someone in the crowd would say something homophobic.

“Especially teenagers, a lot of them probably don’t understand the power of the words they use. They call things ‘gay’ without thinking.”

Flash forward to 2017 and a current student at Greene’s former high school Melbourne Grammar recently came out as gay in front of the entire school assembly, before the school’s footy team geared to play a pride match.

Greene was there, and says it highlighted how far the often hyper-masculine arena of sport had come to ensure sexual and gender diverse students didn’t feel excluded.

“I think there have been amazing steps taken,” he says.

“Seeing my old school hang up the rainbow flag and seeing the student get a standing ovation from a hall full of hundreds was incredible.

“The culture is shifting, and I think when it comes to [queer people] we’re unstoppable; we’ve reached a point where we’re more present than ever.

“That visibility really helps to reshape people’s perceptions of what it means to be gay.”

Greene adds that this cultural shift has even happened within his own sporting family.

“My brother used to say things like ‘fag’ and ‘poofter’ when he played, but now that’s something he regrets a lot,” he says.

“I think we as gay people need to keep occupying the streets and believing we’re a valuable part of the community.

“We need to go to these games with our partner and hold their hand and have open conversations with people about it.”

Helping to drive that change both on and off the field is Greene’s sister Angie, in part fuelled by her brother’s isolating experiences with team sports when he was younger.

“I witnessed both of my brothers have two completely different experiences with sport growing up,” she says.

“From a young age Brent intentionally excluded himself from male-dominated sports because of the language that consumed much of the culture.

“I was the first person he came out to when we were teenagers, and I learned a lot about him during those years – what he was going through and the brave face he was putting on to everyone else.

“We know that over 50 per cent of non-hetero and gender diverse people exclude themselves from team dominated sports at a young age, and I think that is fucking unacceptable.”

While Angie still went along to support Steven while he played for Hawks, she says she hated being a part of the crowd and hearing the sexist, racist, and homophobic comments that were bandied around.

This, alongside the hardships her other brother was experiencing when it came to sport, motivated her to establish Stand Up Events, a not-for-profit that helps to educate, train, and challenge sporting codes and fans on how to eradicate homophobia and discrimination from the teams.

However, she’s quick to mention that the organisation is far bigger than just her legendary sporting family, or exclusion felt by her gay brother.

Since its establishment Angie has visited 16 football clubs to help raise awareness around the damaging effect casual homophobia can have on players and fans alike. She also recently sat down for a coffee with Footy Show co-host Sam Newman after he made a number of transphobic comments on his show.

She says when it comes to team sports, players often don’t want to be ‘that guy’ and call out someone’s anti-gay bigoted language.

“Any chance I get I try and educate people by likening it to racism,” she says. “I say there’s no difference between racism and homophobia, the only difference is you can’t hide your skin colour.

“You don’t know how you might be helping someone along the way by calling someone out and saying ‘we don’t use that language’.”

Whenever Angie first visits a club or team, she asks whether the players hear words like “gay”, “faggot”, or “poof” on a daily basis. One hundred per cent of hands go up.

She then asks how many of them hear derogatory racist terms, and one hundred per cent of hands go down.

While Steven, Russell, and Frank have catapulted the Greene family to become sporting legends, Angie’s trying to shake up the culture from the inside.

“I might go to a club for 20 minutes, and I’m aware what I say might only stay with one or two of the players, and others may forget I was even there, but that’s why I’m so strong about the individual process,” she says.

“You can slap an anti-discrimination sticker on a wall but unless you’re actually getting through to people on a personal or face-to-face level, it’s useless.”