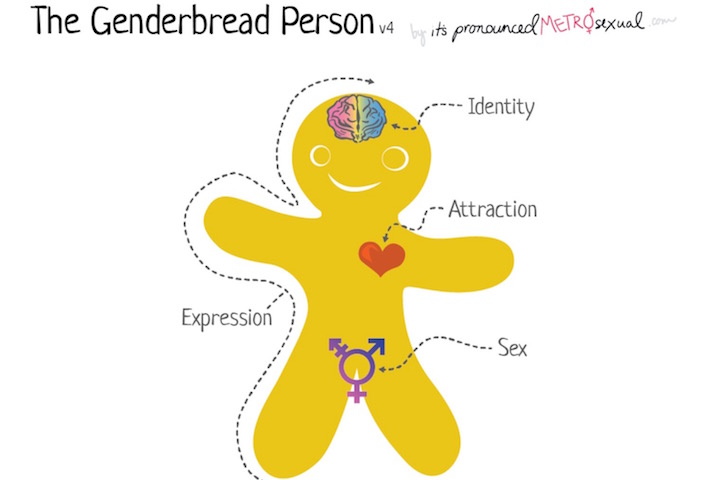 The controversial ‘genderbread person’, aimed at teaching students that gender is dictated by the brain rather than genitalia, has been pulled from a NSW school following a parent’s complaint.

The learning material teaching high school students about gender identity has been pulled from a school in regional NSW after a mother complained about the use of the ‘genderbread person’ in her 15-year-old son’s classroom.

The unnamed woman is also mother to a 19-year-old transgender son, whom she mistakenly refers to as her daughter.

After the 15-year-old came home ‘angry’ over the material being taught in class, the mother complained about the education tool used to teach students that anatomy doesn’t necessarily determine gender.

After writing to state and federal health ministers, the school’s principal called the mother to apologise and inform her that the ‘genderbread person’ had been removed from the school curriculum.

Advertisement
She believes the school’s inclusive approach towards identity is introducing “confusion” for children like her 19-year-old son, whose gender identity she attributes to depression.

“In over a year of feeling like I have been beating my head into a brick wall, at last a sensible response,” the mother told The Australian.

“Gender and sex are being confused [in school] – it starts to introduce this confusion, especially with vulnerable young people like our [son].

“Some parents I’ve spoken to have said their children who are on the autism spectrum have been sucked into this [trans identity] – these are kids who are looking for somewhere to fit in. Other parents, their kids have had sexual abuse.”

The mother reportedly raised the issue with MPs but had been “bounced around like a hot potato” before the school eventually agreed to remove the genderbread teaching tool.

The mother also detailed her outrage at her 19-year-old son being given hormones to combat his gender dysphoria and believes children like hers need therapy, not medicine.

Co-Convenor of the NSW Gay and Lesbian Rights Lobby (GLRL), Jack Whitney, told Star Observer that resources designed to incorporate inclusivity are a necessity as Transgender and Gender Diverse identities are valid aspects of the real world.

“Transgender and gender-diverse children are in our schools today, and they need supportive learning,” he said.

“Resources about gender-diversity are an important anti-bullying tool, and support students who identify as transgender and gender-diverse.

“It’s already very difficult being a young LGBTI person going through high school, and the Government could really improve the mental health and school experience of this community by having curriculums that support them.”

Advertisement
Whitney also touched upon the need for systemic education on matters of identity, gender and sexuality, noting that experts and the LGBTQI community will need to be consulted in the future if any progress is to be made.

“Education advocates and experts have long called for the inclusion of transgender and gender-diverse educational resources and training for teachers,” he told Star Observer.

“We encourage the NSW Government to speak with the LGBTI community, experts, peak bodies, and develop authorised material that supports teachers and educates students about transgender and gender-diversity.”

A spokeswoman from the NSW Department of Education told the Daily Mail that while their personal development syllabus covers a range of topics such as human anatomy and diversity – gender fluidity and ‘Safe-Schools-Esque material still sadly has no place within the NSW curriculum.

“Gender fluidity is not part of the NSW Curriculum. The department does not endorse the use of associated materials and schools have been made aware of this,’ the spokeswoman said.

“The Genderbread resource was not developed by the NSW Department of Education. The school immediately withdrew this resource from future teaching and learning programs, following a request by the department to review its use.

“The Safe Schools program is not and never has been, part of the NSW curriculum. The NSW Department of Education does not promote this program or its resources.”

Next post Melbourne Man Who Faced Homophobia At Work Sues