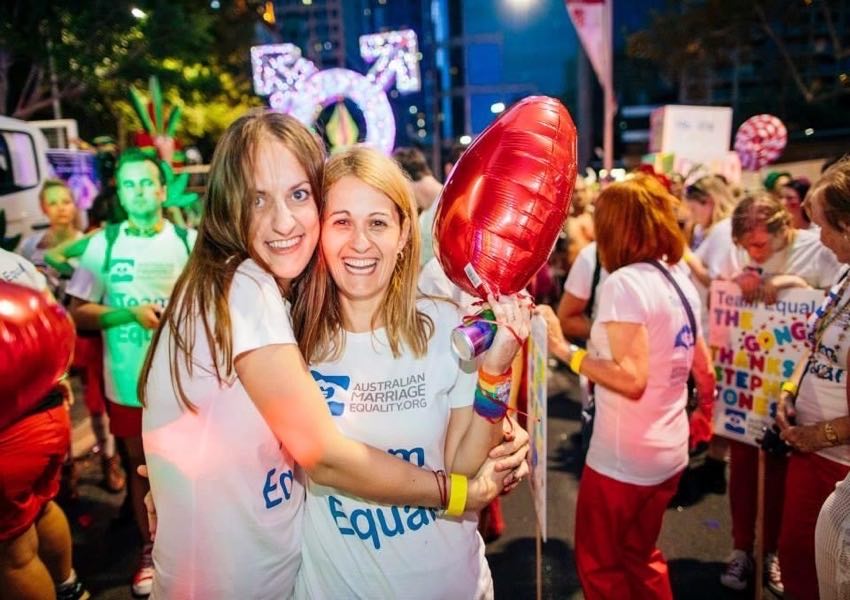 Having achieved our goal to change the law so every Australian can marry the person they love in the country they love, Australian Marriage Equality (AME) has now officially wrapped up as an organisation.

Along the way we magnified the visibility of LGBTQI Australians in every part of Australian life and encouraged hundreds of thousands to take their first political action, whether it was signing a petition, writing a submission, meeting their MP or attending a rally.

This journey was not easy, at the beginning, or at the end. We could not have lasted without so many community supporters and the generosity of our volunteers and donors.

Australian Marriage Equality was originally created as a standalone, single issue organisation at a time when many within the LGBTQI community thought marriage equality was in the too hard basket. However in 2004, a courageous group of individuals, from across the country, refused to accept this and formed the grassroots and trailblazing volunteer organisation, Australian Marriage Equality.

Throughout our organisation’s history we marched on the streets, into boardrooms and, through the halls of federal parliament. Gaining support every step of the way. We weren’t the only ones campaigning for reform and we are grateful to have worked with many amazing advocacy organisations, community groups and people from across Australia.

Despite the length of the marriage equality campaign, meeting countless grassroots campaigners and hearing their personal stories encouraged us to continue our work and gave us hope. We continue to be inspired and motivated by their resilience, courage and persistence in pursuit of equality.

In 2017, when the postal survey was forced upon us all, our movement achieved the largest electoral victory in Australia’s history, achieving a YES result in 133 out of 150 electorates. While we celebrated Australia saying “Yes”, this painful and legislatively unnecessary process and the nature of our opponent’s campaign was gruelling and harmful to many.

On the one year anniversary of the historic passage of marriage equality legislation through parliament, our partners in the Equality Campaign, formed Equality Australia to lead ongoing national campaigns and legal advocacy for the LGBTQI community. AME went on to share our learnings and our passion for marriage equality with other countries in need. When neighbouring Taiwan reached out for help, we were delighted to assist their campaign with fundraising and sharing lessons from our decades plus campaign.

Taiwan’s marriage equality advocates were experiencing an all too familiar pain: a lack of courage from political leaders, on-going legal battles and a national public vote. Along with others from the Equality Campaign team, we joined our friends at Freedom To Marry in the USA, an organisation that helped us greatly throughout our campaign, and supported and encouraged Taiwanese campaigners to their recent victory.

In Australia, this year has been particularly devastating for many within our community. It began with bush fires that ravaged communities and the health and economic toll of COVID-19 is still not fully known. In wrapping up our organisation, our board agreed to disburse our limited remaining funds to organisations assisting in the provision of mental health support, youth support, domestic violence support services and homelessness support programmes for LGBTQI people as well as support for rural and regional prides who play such an important role in community building. We have ensured our funds will be spread across all states and territories and support the most vulnerable in our community – LGBTQI Aboriginal and Torres Strait Islander people, and the trans and gender diverse community who were targeted by the NO campaign.

Of course, we still face many challenges and we will keep our social media pages alive to promote the vital work of leading community organisations and to reflect on the marriage equality movement. This includes promoting the valuable work of groups like Equality Australia, and at a time when LGBTQI health is under increased pressure, the work of organisations such as the Queensland Council for LGBTI Health, Thorne Harbour Health and ACON is particularly critical. We will also support community celebrations including the Sydney Gay and Lesbian Mardi Gras, especially in the lead up to WorldPride in 2023 which will draw attention to our regions LGBTQI issues on a global scale.

In addition, AME has partnered with The Pinnacle Foundation to establish the “Australian Marriage Equality Scholarship”, which will focus on supporting LGBTQI students who are Aboriginal or Torres Strait Islanders or from rural, regional or remote Australia. We hope this supports and inspires the next generation of LGBTQI leaders to continue making Australia an equal and fairer place for all. We acknowledge and thank the Pinnacle Foundation for working with AME on this enduring scholarship.

On behalf of our board and, as the longest serving person in Australian Marriage Equality, I want to thank those who established our organisation, all those who worked or volunteered alongside us, those who donated to us, and everyone who supported us through a challenging but ultimately successful existence.

We hope that our journey sends a message of hope to all campaigns for social justice and equality that you should never give up and with persistence through adversity you can make Australia a fairer and more equal place for all.

Next post 34-Year-Old Free Of HIV, But Experts Urge "Caution"

About the Author Alex Greenwich