An artist's impression of The Big Chalk.

HOT on the heels of City of Sydney’s confirmation that Taylor Square’s rainbow flag will remain as a permanent fixture, plans are now underway to erect a monument across the road in honour of the rainbow chalking movement.

According to a development application (DA) that has been submitted to the Sydney council and obtained by the Star Observer, the monument would be eight metres tall and one metre wide, and would be known as The Big Chalk — in line with the Australian tradition of The Big Banana, The Big Prawn, The Big Merino and The Big Pineapple.

Advertisement
The DA also dictates that The Big Chalk would be painted in rainbow colours, in honour of the global chalking movement that started in Sydney during the outrage that ensued from the Taylor Square rainbow crossing removal after the 2013 Mardi Gras festival.

An artist’s impression of the monument shows that The Big Chalk would tower over The Oxford Hotel and stand in front of the historic and defunct Taylor Square toilets.

The DA states that once The Big Chalk is constructed, foot traffic to this northern side of Taylor Square should increase dramatically, breathing new life into the area that has suffered a downturn in business mainly because of the state government’s controversial lockout laws.

The DA estimates that construction of The Big Chalk would cost around $85,000 — higher than same price tag that came with the rainbow flag across the road — and implores City of Sydney to ensure the monument is permanent.

The proposal does not indicate if there would be an acknowledgement of Australia’s LGBTI rights movement and history over the past five or six decades. 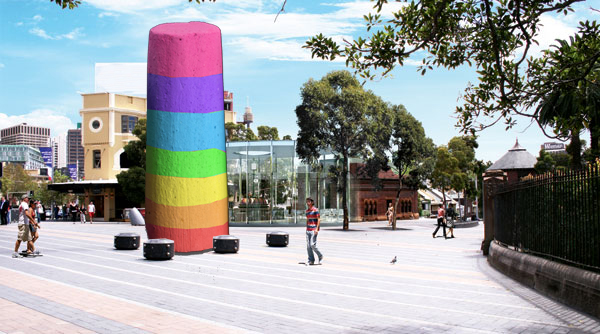 An artist’s impression of The Big Chalk.

(Editor’s note: This story is purely fictional and written in the spirit of April Fools’ Day.)

Next post HIV medication Triumeq now available through the PBS

Previous post Against Equality: An interview with Ryan Conrad