THE photographer behind the acclaimed Red Hot exhibition, which has its Australian debut in Sydney this week, has told the Star Observer his aim was to make ginger men sex objects and Prince Harry would be his perfect pin up.

Following rave reviews in London and New York, Thomas Knights’ exploration of the beauty of the red-haired male opens at the Deutscher & Hackett Gallery in Darlinghurst on Wednesday.

Advertisement
Tonight, an event a few doors down the road from the gallery at Slide bar will decide on an Australian addition to the exhibition.

On first blush, it might seem a no brainer than Knights — who is himself a red head — should be behind an exhibition that seeks to present ginger men as hirsute heartthrobs.

However, when living as a backpacker in Sydney seven years ago, the photographer would put his locks through a punishing regimen to keep their natural hue hidden.

“I had that whole Aussie surfer thing going on. I dyed my hair blonde because I hated being ginger — I felt really ashamed of it,” he recalled.

“In the UK there is this real thing to never date a ginger guy, no one wants a ginger baby even to the point sperm banks have stopped taking sperm from ginger men,” he said.

He laid much of the blame on popular culture and the contradictory representation of red heads.

It was shortly after his return to the UK from Sydney that, for the first time since school, the photographer decided to reveal his red hair.

“It was a ten year journey of getting to a point being comfortable being ginger,” he said.

“Suddenly people were saying, this is the way you are meant to look.”

Knights added that there were obvious comparisons with sexuality and discrimination.

“If you can make a thing that people are bullying you about cool it negates their argument.” 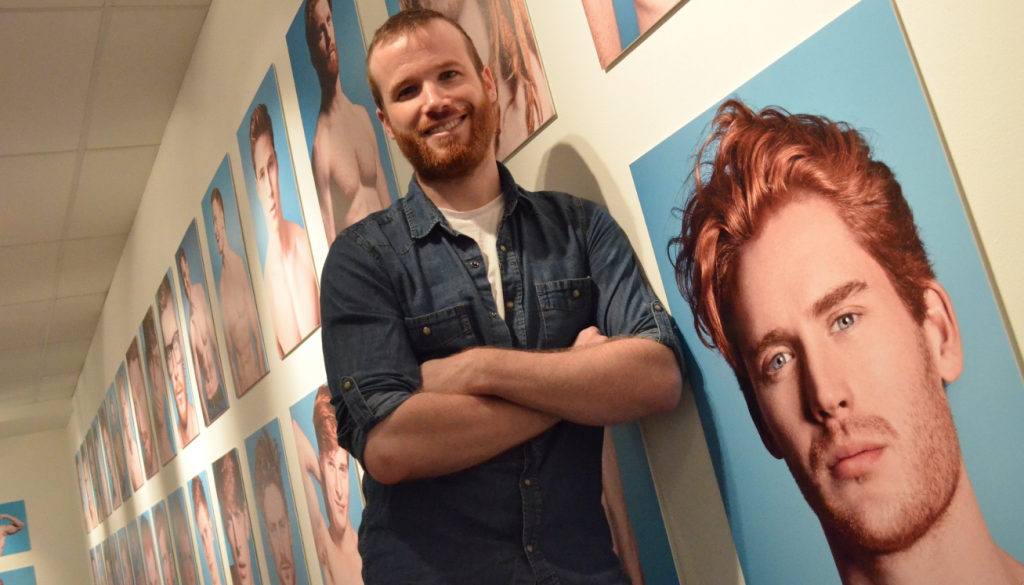 Knights said countering discrimination was why the exhibition has raised money for the Elton John AIDS Foundation. In Sydney, it is joining forces with ACON and Pacific Friends of the Global Fund.

“We’ve got this artistic statement about taking something that is perceived as negative and opening up a conversation so its sits really nicely with people living with HIV and the sense of discrimination they face as well,” Knights said.

While he said the gay community had always been more accepting of red heads, nonetheless he encouraged his models to defy society’s expectations and exude eroticism.

“A lot of the guys are giving you that look because my intention was to purely present the ultimate man as a highly sexual being,” Knights said.

“I’ve wanted to objectify the ginger man and make him like a sex object.”

Many of the images are head shots, red locks popping out from a cool blue background with hints of nakedness below.

However, some pictures eschew the face altogether to concentrate on more southerly hillocks of hair.

“People used to say the ultimate put down was like ‘oh you’ve got ginger pubes’ so I wanted to make ginger pubes hot,” Knights said.

“I put them on a massive wall with guys who are really buff to throw it in your face and go ‘look at these ginger pubes, how fucking sexy are they?’”

Asked if there was one ginger guy missing from his portfolio, Knights was quick with a response: “Prince Harry – Definitely.”

“Getting naked in hotel rooms, Harry is a bit sexy and naughty, and it’s really shifted the perspective,” he added.

Red Hot: Down Under is on display from Wednesday 3–Sunday 14 December at Deutscher & Hackett Gallery, 55 Oxford St, Darlinghurst, Sydney