The asexual spectrum has only recently been brought to mainstream attention. In a climate of gratuitous sexuality, isn't it time we shed light on the invisible "A" in our LGBTI community? Edison Chen investigates. “YOU do know there’s a difference between love and sex, right?”

Someone once said that to my younger self. I wasn’t sure if it was my naivety or lack of wisdom that made it so hard to process at the time. Looking back, it may have had something to do with my sexuality as well — as in, my potential demisexuality.

[showads ad=MREC]As someone who grew up on Disney fantasies and teenage rom-coms, I always had rose-coloured lenses of what romance, attraction and love were. Now as an adult, I’ve noticed a shift in focus on what love and relationships are about. I started being aware that people were happy to “hook up” with each other. Often it was without a first date, without an emotional connection, without knowing each other’s last names — and it was happening everywhere.

I felt a little prehistoric for still wanting my Disney fantasies. Was it because I was romantic, or a prude, or both? It wasn’t until I came across the term demisexual that I began to see things more clearly.

Demisexuals are people who are only capable of developing sexual attractions after they’ve formed a connection with someone, whether that connection be romantic or emotional. It’s also an identity that falls under the asexual spectrum.

Interested in exploring the family associated with demisexuality and the experiences of asexual-identifying, or ace, people, I decided to do a bit of research on the spectrum to see what I could uncover.

Asexuality, according to Julie Sondra Decker’s book The Invisible Orientation, is defined as “the experience of not being sexually attracted to others”. The book also notes that “there is no evidence that asexual people’s hormones are produced differently from anyone else’s”. Asexuality is also seen as a sexual orientation which separates it from the notion of celibacy or abstinence, both of which are forms of behaviour. It’s currently estimated that about one percent of the population is ace. Apart from demisexual, gray-sexual and gray-asexual are other orientations on the spectrum that lies anywhere between sexual and asexual.

Tanya Koens is a sexologist and relationship therapist counsellor who has worked with ace patients in her Sydney clinic. She tells me that asexuals are sometimes made to feel uncomfortable in the LGBTI community, and that some clients see her because they “are feeling distressed by other people’s expectations of them” or because they’re made to “feel strange for not wanting or seeking sex”. She also says ace people often want to form relationships.

“If people identify as asexual then I think it is our job to help them embrace that sexuality and learn to work with it,” she says.

Koens also tells me that she thinks “asexuality can be global or situational”. A disinterest in sex can be a lifelong thing, while other people might find themselves feeling asexual at certain points in their lives.

However, she admits that the lines can be blurry when it comes to identifying between a low libido, sexual aversion and asexuality. Koens differentiates between these by asking patients a lot of questions and by trying to find the source of a potential issue, if there were to be one.

L-R: Derwent, Eero and Kate share their experiences as asexual-identifying — or ace — people.

Kate is an ace-identifying person from Sydney who I spoke to to try and clear up some misconceptions about the asexual spectrum. Kate has had relationships in the past which were mostly sexual relationships, despite being ace.

People who identify within the ace spectrum may be capable of having sex and might do so for different reasons. Kate’s reasoning was that it was “how you express love” and the expected way to access intimacy with others, despite it not being the best way for them to do so.

A recent survey conducted by the Asexual Visibility and Education Network revealed that within their sample study of sexually-active aces, 75 per cent had sex to please a partner, 56 per cent for curiosity, 41 per cent out of social expectations and 36 per cent for pleasure. On the spectrum of ace people, there are also those who range from being “repulsed” to “indifferent”, and to being “positive” towards the act of sex despite not feeling sexual attraction. Comparatively, non-asexual people sometimes willingly engage in sexual activity with people they don’t feel attraction to, as well.

Kate feels indifferent towards sex and doesn’t see it as necessary for relationships: “Physical affection and communication sound like the best thing ever.”

In response, I ask a somewhat obvious question: “But isn’t a relationship without sex just a really good friendship?”

Kate says asexuals differentiate friendships and relationships with the notion of commitment — not necessarily monogamous — and intimacy. When asked to describe memories of love, Kate recalls an experience where they thought the other person was great and deeply cared for them: “Getting to know somebody well and then realising I’m special enough to hang around with, that’s amazing.”

Eero from Perth is an asexual who is a big Star Trek fan that engages in sexual activities, but compares the enjoyment derived from it as the same as watching Star Trek marathons.

Eero also identifies as aromantic, which refers to a lack of romantic attraction. Romantic attraction is the desire for romantic relationships with others, but this feeling can be hard to distinguish from friendship for some people. Aromanticism is also a spectrum that houses gray-romanticism and demiromanticism. It is distinct from asexuality as sexual and romantic attractions are different concepts, despite clashing at times. Eero tells me that as an aromantic, relationships are just like traditional relationships but without any romance involved. Relationships involving close emotional connections beyond what most people consider friendship are known as queerplatonic relationships. Eero also mentions asexuals and aromantics are sometimes dismissed as just being “late-bloomers”, but reiterates they’re very much done with puberty.

When asked about other common misconceptions about asexuality, Derwent, a demisexual from Perth, says they’re sometimes told they “haven’t found the right person yet” or “just need a good dicking”. Derwent also explains that an asexual person’s orientation may not have anything to do with previous traumatic experiences of sex.

In looking through asexual resources, I found it helpful to be able to think of romantic and sexual attraction as separate entities. In addition to these attractions, there are more types of attractions than may be helpful for identifying certain feelings.

It’s also important to highlight actions involving intimacy and connections that may be happening due to differing attractions and contexts from the other individual. For example, just because you kissed someone at the club doesn’t mean it’s love.

Being aware that we all have different expectations, feelings and approaches to relationships with other people is an important part of the LGBTI community, as it helps us embrace the diversities within humanity.

As a tentative homo-demisexual, that means I probably won’t feel like making out with you until I start imagining how nicely our hyphenated last names would sound together (Franta-Chen). As for other demisexuals, their experiences will probably differ greatly.

Either way, asexuality — as well as aromanticism — are quite diverse spectrums that help people validate their perspective of the world.

NOTE: Some names have been changed for this story 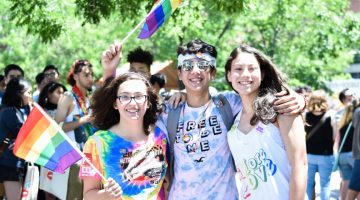