Love it or hate it, the appendage that dangles from between the legs of around half the population is a constant source of fascination for those who have one. The size of yours and how it measures up against everyone else‘s on the planet is a rumination that many of us with a willie wonder, sometimes constantly!

Well now, for a more realistic world view on the subject, the good folks over at at From Mars put together a report drawn from statistics from the World Population Review, detailing the average penis size of penis owners from 86 countries and the results are, frankly surprising.

Even more so when you read the following disclaimer from the authors of the report, “Before we address which countries have the most packed packages, it’s important to note that the original study relied on self-reported data, so it is entirely possible that plenty of the respondents were a little generous with their member measurements.”

Advertisement
Translation, even the surprisingly modest numbers at the top of the list are probably even smaller than what was self reported, something to take into account whilst grading against your own bell curve!

Men Can’t Be Trusted To Measure Their Penis Sizes Accurately This is obviously also taking into account the inevitable measurement discussion, even if it’s with yourself, about where to start and end the measurement procedure and the eternal discussion about if it’s considered cheating to push the ruler through two centimetres of “padding” to start at the base. At the bottom of the list are Cambodian men, wielding an average, purse-sized 3.95 inches diddle, when all riled up. The other countries at the bottom include Taiwan (4.24 inches), Philippines (4.27 inches), Sri Lanka (4.29 inches) and Hong Kong/ Bangladesh (4.41 inches).

And smack bang in the middle are us average Aussies. Straight down the middle of the pack, sitting at 43 on the list and measuring up at an average of 5.69 inches, slightly bigger than Nigeria at 44 with 5.66 inches.

Advertisement
Aussie’s can hold their heads high at being completely mediocre in this regard! The US comes in at 59 at 5.35 inches, while the British find themselves at 66th place at 5.17 inches. 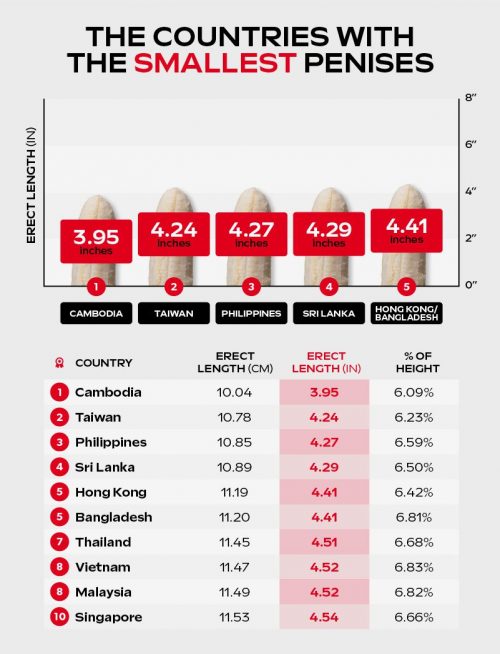 But penis size and what is considered desirable by society is a fluid concept. Massive hard-ons are all the rage now (until you’re looking at one in the eye and then it’s kinda like, what do you think you’re gonna do with THAT thing!), it wasn’t always the case.

In Ancient Greece, for example, a neat and tidy package was all the rage, possibly because of the aesthetically and artistically pleasing balance a proportional appendage offered, rather than a gargantuan distraction jutting out obscenely.

A recent article from Vice offered another interpretation, “… the ancient Greeks saw a small penis as a sign of modesty, rationality, and self-control, which they valued, and a large penis as a sign of idiotic, animalistic lust—of a complete lack of restraint.”

So fear not! What you initially might have thought of as piddly, is probably, in the grand scheme of things, not that bad at all and hey, we’re beating the fellas across the ditch in New Zealand, coming in at 50 on the list of 86 at an average of 5.51 inches. Though don’t get too comfortable – Covid cock is a real thing!