New research shows LGBTQI people do not have the support systems they need to handle domestic and intimate partner violence.

ANROWS believes that the “heterosexual face” of domestic violence is disguising the fact that domestic, family and intimate partner violence (IPV) also occurs in LGBTQI relationships.

This “heterosexual face” means many LGBTQI people experiencing violence struggle to access support services after, as well as struggle to access services for those who wish to change their violent and abusive behaviours, according to new research published today by ANROWS.

The report, titled “Developing LGBTQ programs for perpetrators and victims/survivors of domestic and family violence,” aims to develop specialised tools for understanding IPV within the LGBTQI community.

The report also tackles service responses to LGBTQI people experiencing IPV or domestic violence, outlining improvements that could be made in police systems and criminal justice responses when dealing with cases of abuse in LGBTQI relationships.

“This research highlights the need to support the LGBTQ community in developing readiness to recognise domestic and family violence and then seek support,” she said.

The collaborative research project with ANROWS, ACON and Relationships Australia New South Wales, identifies unique tactics of abuse and threats which are designed to undermine or isolate a survivor.

These tactics of abuse tend to centre around identity, and capitalises upon a survivor’s fear of being outed, or play upon their experiences of discrimination and internalised homophobia.

Advertisement
“I grew up thinking I was probably crazy because I was queer. So I grew up thinking there was already something in me that’s broken. So it doesn’t take much for a partner to play on that and go, ‘Yeah, you are totally broken. And here’s the ten ways that you are broken,’” an LGBTQI community member and Focus Group participant said.

The research also found that trauma caused by discrimination and the stigma attached to identifying as LGBTQI, known as minority stress, also influences LGBTQI community members’ experiences of IPV.

Project Lead and member of ACON, Brandon Bear, noted that these niche abuse tactics, coupled with minority stress, can prevent survivors and perpetrators from recognising the abuse they face as legitimate.

“In several cases, participants in the study struggled to apply the term ‘domestic violence’ to their experiences of abusive dynamics in their relationships,” they said.

“They did not see them as severe enough to warrant the label. Sometimes this was because they had previously experienced other forms of abuse, such as psychological or emotional abuse in their biological families, which they perceived as more insidious.”

Advertisement
A survivor of domestic abuse, Sioned, told Star Observer that this inability to identify IPV is also due to a lack of information and representation of healthy LGBTQI relationships.

Sioned was verbally and physically abused by her partner during their three-year-long relationship and said that she struggled to identify with being the victim of abuse due to not just stigma, but a lack of education as well.

“You don’t see representations of queer relationships a lot even now, and you certainly didn’t when I was younger,” she said.

“When you’re queer, you have to create your own narrative of what works best for both of you with each relationship. When you’re straight, you know what a healthy relationship is meant to look like because it’s everywhere.

“So, when you’re not in that heteronormative relationship, you don’t apply those ideals. She [her ex-partner] could fly off the handlebars, and I would assume it’s because we’re ‘different’. It is a different paradigm when its two women, and compounded when you aren’t necessarily taught what you need to identify as ‘unhealthy’.

“I felt like maybe it could be normal for us. That’s the thing. Even when we do see a queer relationship represented anywhere, it’s rare that you could consider that relationship ‘healthy’, so we’re already starting from a bad place.” 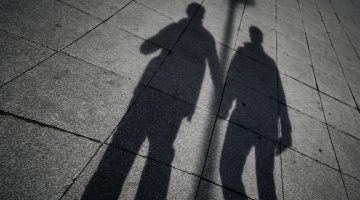