A FORMER Liberal MP has made a pamphlet of which he plans to print millions of copies to use in an anti-marriage equality campaign, which claims children of same-sex couples are more prone to neglect, unemployment and abuse.

Chris Miles was a federal MP in the seat of Braddon from 1984 to 1998 and served as parliamentary secretary to former Prime Minister John Howard. He authorised the pamphlets to encourage people to vote “no” in the impending plebiscite on marriage equality.

Advertisement
The pamphlet, leaked to Fairfax Media today, claims heterosexual couples have a better record of providing safety and development of healthy, well-adjusted children based on data from the US Department of Health and Human Services.

It also asks people to vote “no” to marriage equality if they don’t know the “valid empirical data of ‘same sex’ couples conceiving and caring for children to adulthood”.

Miles warns if marriage equality becomes a reality the risk of the following could increase: anxiety in family, depression, suicidal thoughts, young adult relationships, romantic relationships, and the number of girls without mothers will become mothers (and the same for boys without fathers).

Miles told Fairfax Media the material in the pamphlet — which is yet to be distributed — was “thoughtful and constructive” and he expected some people to be hurt by the pamphlet but “lots of things are hurtful to people in Australia. Everyone hurts on a whole range of views”.

“If we are going to have a plebiscite, people need to be informed,” he said.

“That’s the nature of democracy.” 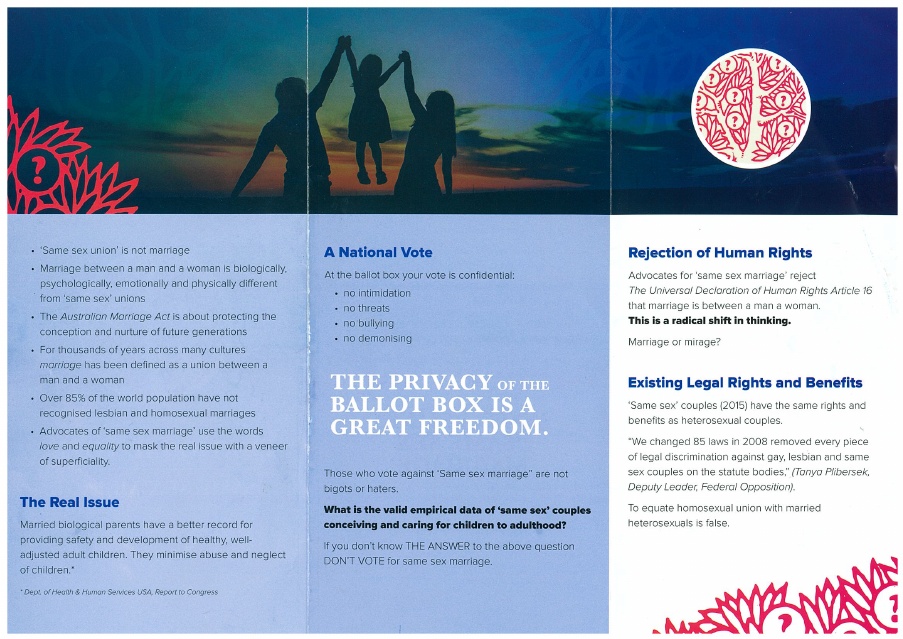 South Australian Greens Senator Robert Simms warned the pamphlet was a window on what could be expected from anti-marriage equality campaigners during a plebiscite.

“During the last week we have seen a tsunami of vile homophobia fanned by people like Cory Bernardi and George Christensen. This flyer is the latest example of this ugly campaign against equality,” he said in a statement.

“It’s clear conservative extremists are planning an ugly hate campaign levelled at the LGBTI community and the Prime Minister Malcolm Turnbull is sitting back and letting it happen.

“The Greens are concerned for the impact this kind of hurtful campaign might have on young people in particular.”

Australian Psychological Society psychologist Dr Liz Short condemned the leaflet, saying it was factually incorrect and could be deeply damaging for LGBTI people and their children.

“A review of research in this area that was undertaken by the APS shows the children of same-sex couples are likely to be at least as well adjusted, socially, emotionally, and academically, as other children,” she said.

“It also shows their mental health is vulnerable to exactly the kind of prejudice and hostility to be found in this leaflet.
“The APS opposes a plebiscite on marriage equality and prefers a vote in parliament because we fear there will be much more of this damaging misinformation.”

Australian Marriage Equality national director Rodney Croome said they would continue to campaign in a positive way and wouldn’t succumb to the negative tone of the pamphlet.

“This is just the start of the anti-gay misinformation campaign millions of Australians will have to endure if the government spends $160 million on a marriage equality plebiscite,” he said in a statement.

“Australia can avoid a damaging plebiscite campaign, and we could have marriage equality by mid year, if parliament is simply allowed to do its job and has a free vote.”

“Not only is the information on this flyer wrong, it will put the lives of young gay people and the children of same-sex couples at risk by reinforcing the message that they and their families are broken.”