‘We had more power than anyone expected of us’: Alexander Chee on ACT UP and gay activism

"I wanted to leave a record of some of how and why we fought for our lives and our rights." Gay Korean-American writer Alexander Chee hopes his work will help people like him feel less lonely. He spoke with Matthew Wade ahead of his upcoming trip to Sydney.

Has your queer identity played an important role in your writing over the years?

I don’t know if we live in an age where it couldn’t. And after 2008, when Asian American literary scholars told me I was the first Korean American gay author of a book of fiction, it became important to me in ways I never imagined.

Did you look up to queer writers or connect with LGBT novels when you were younger?

I read anything I could find, though it was hard to find in suburban Maine in the 1970s. The Alexander novels of Mary Renault, the paperback bestsellers of Gordon Merrick, John Cheever’s The Falconer. The Joy of Gay Sex was the first book I read by Edmund White. In college in the ‘80s, I added David Leavitt’s Family Dancing and The Lost Language of Cranes, and the novels of Jeanette Winterson and Sarah Schulman.

How did you go about deciding which essays to include in How to Write an Autobiographical Novel?

I chose favourites with my agent, a long session with paper drafts and coffee, and then whittled down some more. I noticed a theme—some of it material or details that didn’t fit into my first novel. The result begins with me as a young boy writing stories to amuse himself while on a field trip to Mexico, and ends with me as a writer and teacher, trying to figure out what to say in class the day after Trump’s election. Six were unfinished or unpublished, and I chose the book as a chance get to make good on finishing them and publishing them, though I was choosing from about 70. It was fun and enlightening. I hadn’t expected putting the collection together to feel so much like writing something new.

In How to Write an Autobiographical Novel you explore your time in San Francisco, attending ACT UP protests. What did you learn about the community during that time?

That we had more power and love and creativity than anyone expected of us, and we still do.

What are you hoping members of the LGBT community will learn from your essays?

I wanted to put this book out in part so as to leave a mark on the culture so that those like me would never feel the loneliness I felt, thinking a writer like me had never existed before. Whether that person is a young queer writer, or Korean or Korean ancestry, mixed, working through trauma, or even if they only feel they’re daring to be something no one expected of them. And I wanted to leave a record of some of how and why we fought for our lives and our rights.

Do you feel we’re currently in a golden age of LGBT representation in stories, or do we still have quite a way to go?

Both. We’re having an inter-generational conversation on queer lives like never before, increasingly international on scope, and yet we’ve only just begun to create our literature and rescue even a few of the stories we’ve lost over the millennia before now. I can’t wait for what’s next.

You’ll be heading to Australia for the Sydney Writers Festival. What are you most looking forward to?

I can barely contain my pleasure at coming to Australia for this festival. I’ve always wanted to come. I know it may sound odd but I’m literally looking forward to the whole thing.

I’m working on a book of short stories (though it may turn into a novel), and a collection of essays on the craft of writing that I have jokingly been calling “Really, How to Write an Autobiographical Novel.”

Alexander Chee will be appearing in multiple events at this year’s Sydney Writers Festival, running April 29 to May 5. For more information or to buy tickets, visit: www.swf.org.au/writers/alexander-chee. 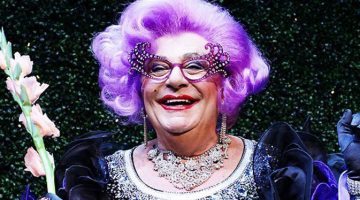