The New Zealand PM said "I may not like what you're saying but I'll defend your right to say it". Folau has been the centre of controversy since posting on social media that God’s plan for gay people was “hell” unless they repent, along with Bible verses supporting his beliefs.

Advertisement
Last year he also came under fire for tweeting during the marriage equality debate that he would not support same-sex marriage.

Asked by Newshub if she considered Folau’s comments hate speech, Ardern was cautious about applying that term.

“I disagree with [the comments] but I’m very careful around how I categorise someone’s speech,” she said.

“I’m very cautious of when you escalate someone’s language into those kinds of categories.”

New Zealand does not have a hate speech law as such; race, colour, and ethnicity are protected by the Human Rights Act, though it does not cover sexual orientation or religion.

Ardern said she “certainly hasn’t seen momentum” in New Zealand towards the need for more specific laws against hate speech.

She said that an important issue was balancing protection from discrimination with the importance of freedom of speech and religion.

“You know the old saying, ‘I may not like what you’re saying but I’ll defend your right to say it’,” she said.

In February she became the first prime minister to march in the Auckland Pride parade.

“The fact we live in a country where we shut down the streets to celebrate diversity, and that we can tell a generation of young people that they live in a place that is inclusive and supportive of who they are, is something I hope we keep doing. I know I will,” said Ardern at the time. 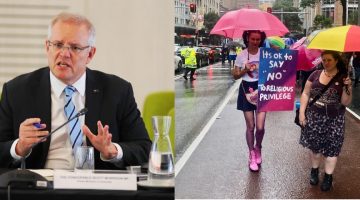