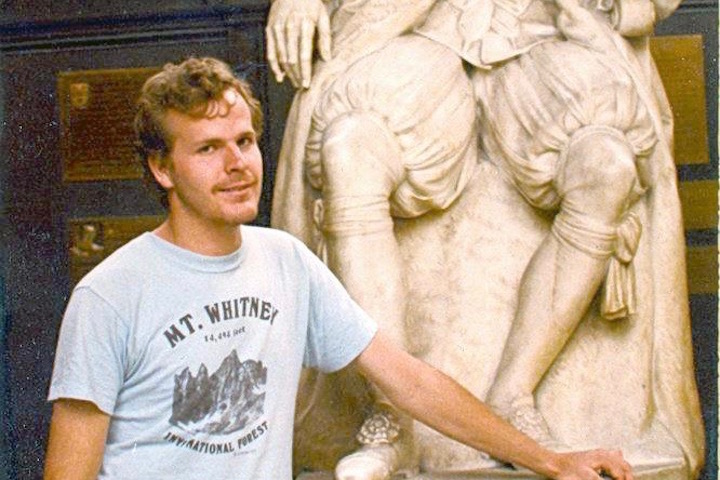 The $1 million reward for information about Scott Johnson's death has been doubled. Image: Justice for Scott Johnson via Facebook

The family of Scott Johnson, a man who was killed in a suspected gay hate crime three decades ago, has matched the $1 million reward offered by NSW Police to bring those responsible to justice.

Johnson, an American-born mathematician who was based in Sydney, was just 27-years-old when he was murdered.

Yesterday Johnson’s brother who lives in the United States, Steve Johnson, matched the reward and brought the total offer to a staggering $2 million.

NSW Police Commissioner, Mick Fuller, and NSW Minister for Police and Emergency Services, David Elliott, joined Steve Johnson at the announcement of his personal contribution as investigators renewed their appeal for information.

“So, in addition to the existing $1 million reward, I will provide up to an additional $1 million for the NSW Police Commissioner, at his discretion, to award to any person who comes forward with new information leading to the arrest and conviction of my brother’s killer or killers,” Steve Johnson said.

“With a reward of up to $2 million on the table, I am hoping that Scott will finally get justice.

“Please, do it for Scott, do it for all gay men who were subject to hate crime, and now, do it for yourself.”

Steve Johnson also commended the great strides made towards LGBTQI acceptance and acknowledged the importance of correcting past injustices for the betterment of the future.

“I have been greatly encouraged by the recent progress in the investigation, and truly honoured by the reception Scott’s case has had with the community,” he said.

“We now live in a more tolerant and open society – particularly here and in the United States – where societies enable their LGBTIQ communities to be their true selves, live safely and unlock their full potential.

“I wish Scott had been afforded the same opportunity, and every effort I put into helping find his killer(s) is also to acknowledge that bullying and gay-hate crime will not be tolerated in our community.”

Two previous coronial inquests were conducted into Johnson’s death, with the first in 1989 finding Johnson had committed suicide, and the second inquest in June 2012 returning an open finding.

The third inquest in 2017, however, found that Johnson was the victim of a gay hate crime and fell off the cliff as a result of actual or threatened violence.

Johnson’s death came during a spate of gay hate crimes across Sydney with men’s bodies normally being found near gay-beats or disappearing completely, as they were swept out to sea.

At the time, many of the deaths were ruled as suicides. However, it’s since suspected that roughly 27 gay men lost their lives to hate crimes.

In 2018, the NSW Government announced the initial $1 million reward for information leading to the arrest and conviction of Johnson’s killer or killers.

Commissioner Fuller said this was the first time such an offer had been made in NSW and celebrated Steve Johnson’s commitment to seeking justice for his brother.

“It has been 31 long years in Scott’s family’s pursuit of answers, and the dedication to their brother is as inspiring as it is heartbreaking,” the Commissioner said.

“While we’d like to believe a person’s conscience would force them to come forward, it’s clearly not in this case. So, if you’ve got the information we need – and cash appeals to you – there’s now up now up to 2 million reasons to talk to us.”

Minister Elliott affirmed that the Government would continue to work towards finding answers as to who killed Johnson.

“I hope Mr Johnson’s generous offer, coupled with the NSW Government reward, will complement the diligent work of investigators to finally find the answers he has been seeking,” he said.

Johnson, a doctoral student at the Australian National University, was in the process of applying for permanent residency in the country at the time of his death after partnering with an Australian music PhD student.