Trans advocates have hit back at attacks on the reforms made by the new group's spokesperson Ben Smith, who works for the Catholic Archdiocese of Hobart. 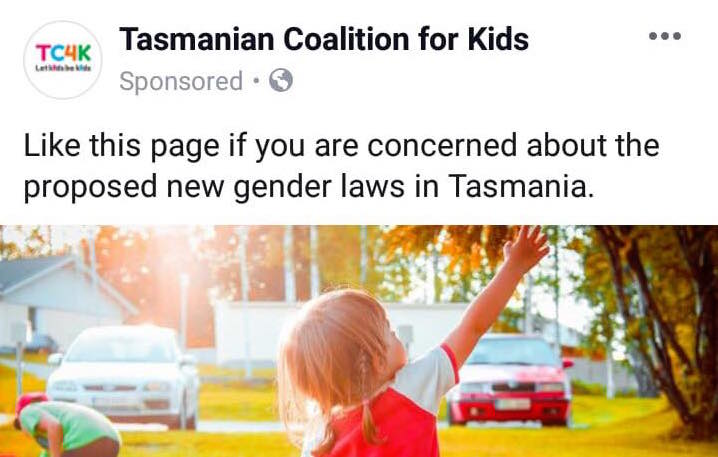 Anti-trans activists in Tasmania have formed the Tasmanian Coalition for Kids in a bid to fight the trans equality laws progressing through the state’s parliament.

Trans advocates have hit back at claims made by the new group that the bill before parliament has not been subject to enough public and legislative scrutiny.

Advertisement
Spokesperson for Tasmanian Coalition for Kids Ben Smith said that “full community consultation, and proper legal analysis” of the bill is required.

But Transforming Tasmania’s Martine Delaney says that the group is simply seeking to delay necessary reforms which have already been properly analysed and put to the community.

“This bill is one of the most scrutinised in Tasmanian history,” Delaney said.

“There has been an inquiry by the Anti-Discrimination Commission, oversight from parliamentary drafters, input from government experts and mainstream women’s groups, debate in parliament, as well as further consultation and refinement by Upper House members like Ruth Forrest.

“When people like Ben Smith say ‘more consultation’, what they really mean is ‘further unnecessary delay’.”

Delaney noted that reforms similar to those being debated in Tasmania have already been passed in the Northern Territory and recommended by the West Australian Law Reform Commission.

“Given reforms like those in Tasmania are being debated and passed in other places around Australia, clearly they are not as complex or controversial as Mr Smith suggests.”

Smith works for the Catholic Church as the Director of the Life, Marriage and Family Office in the Archdiocese of Hobart, having moved to Tasmania after establishing a similar office in the Diocese of Parramatta.

In a post announcing Smith’s hiring in 2017, Archbishop of Hobart Julian Porteous wrote that Smith would head up the Matrimonium Project, which would seek to “publically (sic) promote the fundamentally important role of the natural family for society … in the face of attempts to redefine the nature of the family and the capacity of natural families to work for the full human flourishing of their children.”

“The Church turns to Divine Revelation and faithfully teaches what we find in the Sacred Scriptures: “God made them male and female”. Men and women were designed with marriage in mind.”

In an opinion piece for The Examiner, Smith reiterated his new organisation’s slogan, “We just want to let kids be kids,” which echoes Prime Minister Scott Morrison’s infamous “gender whisperers” tweet in which he declared, “Let kids be kids.”

But Delaney says that’s exactly what the legislation will make possible.

“This legislation will allow trans and gender diverse kids to be just like other kids, without the discrimination and barriers they now face,” she said.

“It’s odd that Mr Smith has waited until just days before the Upper House debate to launch his group, given how strongly he says he feels about the issue and given this debate has been going on for many months.”

The group’s launch comes as independent Tasmanian MLC Ivan Dean prepares to call for the legislation to be investigated by a select committee, claiming the bill could have “unintended consequences”.

Advocates also called for Assistant Treasurer and Queensland MP Stuart Robert to resign last year after he called the reforms are “madness” and said, “We need to know who are men, who are women.”

The Tasmanian Coalition for Kids falls in line with the messaging of Binary Australia, which formed as a rebranding of the Marriage Alliance last year, refocusing its efforts on attacking trans people and trans children.

The legislation passed Tasmania’s lower house in November last year, with Morrison taking to Twitter the day after Trans Day of Remembrance to call the reforms “ridiculous”.

The bill would also prohibit hate speech against transgender, gender diverse and intersex Tasmanians, and while parents will be able to opt not to display a gender marker on birth certificates, medical records will continue to record a child’s sex at birth.