Andrews lays down the Law

In front of several people last week, Margaret Andrews told writer Benjamin Law, following an address he gave at the conference, that she was disgusted by his speech.

“I gave a 15-minute speech about having pride in diversity, no matter what background you come from,” Law told Southern Star Observer.

“She basically said my speech was disgusting, that it was an attack on a family like hers.

“She … then proceeded to attack me, in quite a personal way, saying if she was my mother she would be ashamed of me, and that I hope I was happy with myself, exploiting my family and making money off them, through this book that I’d written [The Family Law].”

Law said he was shaken after the confrontation, but laughed it off.

“My point was, the norm in Australia was changing, I cited a few stats like marriage rates were the lowest ever, divorce rates were up, but so were co-habitating couples, childless couples, shared and mixed families and same-sex parents as well,” Law said.

“It bugs me when politicians or advocacy groups use the term ‘family values’, but what they’re really talking about is a narrow set of values, and a very particular interpretation of what the family is or should be.”

“There was certainly nothing offensive in his speech in any way and we appreciate him for sharing his story with us and doing it so eloquently,” Page said.

When SSO contacted Andrews she said had not taken offense to Law’s speech, and claimed his account of the heated exchange was “an embellishment”.

“I did go out and speak to him, after he gave his address, I simply pointed out to him that there was another view to the one he was expressing” she said.

“I was talking about family, I didn’t use the word gay, gay didn’t come into it at all. I pointed out to him there was another view about family life to the one he was putting forward.”

Andrews was asked several times which part of Law’s address she didn’t agree with, but she declined to comment. 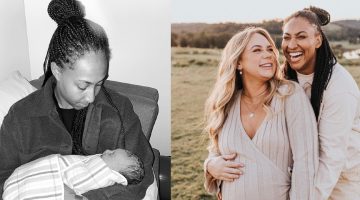