Following the assault of a gay man in St Kilda recently, a homophobic sticker was spotted in Melbourne inciting violence against the gay community. 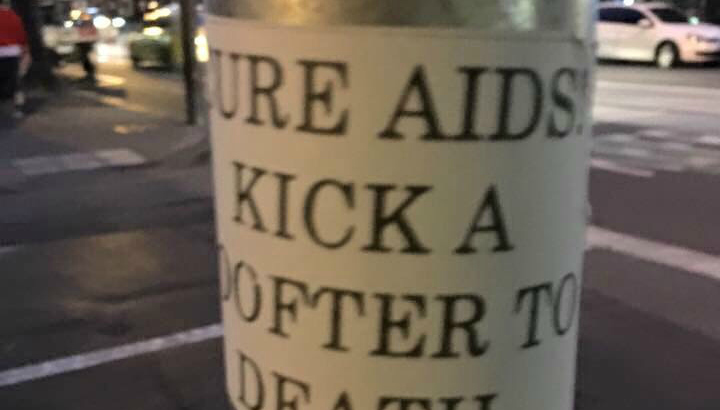 A HOMOPHOBIC sticker inciting violence against gay men was posted in Melbourne over the Australia Day weekend, causing upset among community leaders and anger on social media.

The sticker was branded with the slogan “Cure AIDS! Kick a poofter to death” and was spotted on telegraph poles along Chapel St, South Yarra.

The Star Observer has yet to confirm if other stickers with a similar message have been located around the city.

The stickers appear just days after a man was assaulted in St Kilda in what was believed to have been a homophobic hate crime.

Advertisement
The man was hospitalised after being physically assaulted by four men who also allegedly threw a number of homophobic slurs at him.

In a lodgement of complaint that was circulated to various media outlets and Victoria Police, Living Positive Victoria chief executive Brent Allan urged Stonnington City Council — one of Australia’s most LGBTI-centric councils and where South Yarra is located — to take action.

“These sorts of cowardly acts affect the safety and securing of those most vulnerable in our community,” he wrote.

“I would request that authorities take the appropriate steps to remove these stickers and record this incident as a violent and threatening act against the GLBTIQ community and against people living with HIV.

“I would also like the matter noted in the record as yet another act of aggression and violence towards marginalised communities being gay men and people living with HIV.”

Stonnington Council stated this morning that appropriate measures were being undertaken.

“We’ve logged the call with our graffiti removal team with the view to removing these stickers as soon as possible,” a council spokesperson told the Star Observer.

“Our council supports and promotes diversity… we were recently re-accredited for the Rainbow Tick for the next three years which means we’re formally accredited with demonstrating LGBTI inclusive service delivery and practice.”

Victorian AIDS Council chief executive Simon Ruth said while he condemned the sticker, the community should still feel safe in the neighbourhood.

“This sort of homophobia is reprehensible but it’s the exception rather than the rule,” he told the Star Observer.

“Prahran, South Yarra, and the surrounding areas are generally safe for the LGBTI community, and that hasn’t changed because one sad person has decided to put the sticker up.

“The stickers need to be removed, and I’m aware that the police have been notified… if they can catch the person something should be done.”

However, Ruth said the community shouldn’t let the sticker incite panic: “The community at this stage needs to be conscious that this is a very safe neighbourhood and not be too terrified.”