Soon after a Change.org petition was created in response to an elderly Melbourne gay couple being ordered to take down a rainbow flag from their apartment balcony, lawyers stepped forward to support them for free. 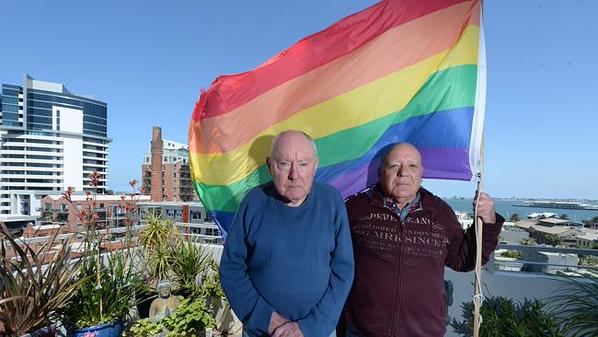 Murray Sheldrick, 78, and James Bellia, 72, were ordered to take down their rainbow flag from their Port Melbourne apartment balcony. (Image via Twitter)

HUMAN rights lawyers and online activists have rallied behind an elderly gay couple in Melbourne who were ordered to take down a rainbow flag from their balcony last week.

Murray Sheldrick, 78, and James Bellia, 72, would have faced legal action in the Victorian Civil and Administrative Tribunal if they did not comply with a letter from the Melbourne Inner City Management Property Owners Corporation to have the flag removed from their Port Melbourne apartment balcony.

[showads ad=MREC]When the news made headlines this week, a Change.org petition was created by online activist Pauline Pantsdown for the couple in response, which suggested a case of LGBTI bulling and an abuse of powers to justify bullying.

The petition has already attracted over 5600 signatures just one day after it was established.

In addition, lawyers from the Melbourne-based Human Rights Law Centre and Kliger Partners have volunteered defend a gay elderly couple for free.

According to The Age, the letter from the body corporate stated that the couple breached building rules affecting the “peaceful enjoyment” of the other residents.

The letter also said the couple were in breach of rules for “displaying advertising material” and that had to remove the flag immediately. The letter did not make it clear exactly what was being advertised by having a rainbow flag on display.

Bellia told The Age that he and his partner were convinced the email was homophobic as their flag had “nothing to do with advertising, as the body corporation suggested, nor was it obstructing someone’s view”.

“We are positive it is homophobia, there is no doubt about it. Why else would they bother us? The flag is on a huge terrace, it’s not in anyone’s view,” he said.

The Melbourne Inner City Management Property Owners Corporation rejected the suggestion their order discriminated the couple, and said it regretted any hurt they caused.

The owners corporation stated they had to maintain the external appearance of the building, which is why there were rules that banned any flags from balconies.

“A uniform external appearance is to be maintained. Even curtains, blinds and window fixtures are to be of a uniform nature,” the group said in a statement.

Human Rights Law Centre’s Anna Brown told The Age that the order from the owners corporation had “restricted the rights of these men to express a political view and positively affirm their identity”.

“This enforcement action is not only harsh but could be subject to legal challenge if it goes beyond what is permitted by the body corporate rules or those rules have been applied in a discriminatory way, for example if only the pride flag has been singled out,” she said.

Meanwhile, Kliger Partners’ Rochelle Castro, a lawyer who specialises in legal cases concerning body corporates, told The Age that there was nothing in the Owners Corporations Regulations banning a flag on a resident’s balcony.

She also said the flag was a temporary feature – unlike the permanent, fixed nature of blinds or curtains that could be regulated – and that the argument that the rainbow flag was a form of advertising would not succeed in a court case.

You can view and sign the Change.org petition here.