The NSW government on Wednesday said it would not support One Nation MLC Mark Latham’s anti-trans education bill. One of the reasons the Dom Perrottet led NSW government gave was that the bill “may lead to targeted discrimination against a marginalised community which already experiences poorer mental health and wellbeing outcomes.”

Trigger Warning: This story has details of transphobia and discusses suicide, which might be distressing to some readers. For 24-hour crisis support and suicide prevention call Lifeline on 13 11 14. For Australia-wide LGBTQI peer support call QLife on 1800 184 527 or webchat.

Advertisement
LGBTQI advocacy organisations welcomed the government’s decision to reject Latham’s bill. “The LGBTIQ+ community in New South Wales will breathe a little easier today, as the NSW Government has stood up to One Nation’s bullying of trans and gender diverse kids, affirming their right to connect, succeed and thrive at school,” Ghassan Kassisieh, Legal Director of Equality Australia, said in a statement.

This is the second setback for the One Nation MLC within a month. On February 24, Latham’s anti-LGBTQI Religious Freedom Bill was defeated in the NSW Parliament.

Bill Would Forcibly Out Students To Their Parents 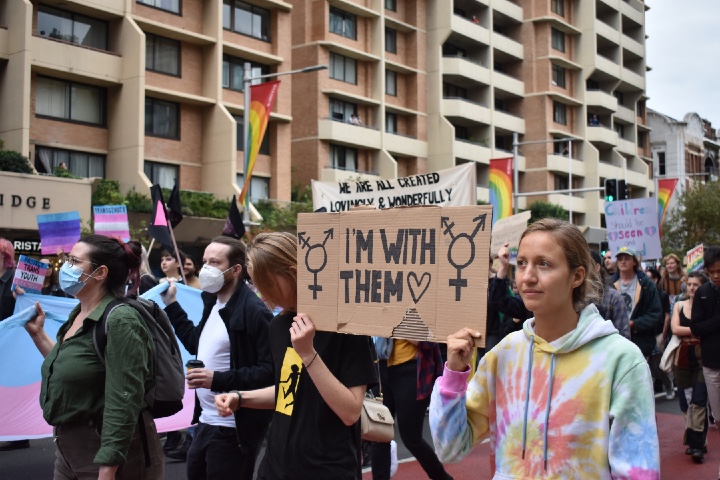 Latham’s bill was likened by LGBTQI organisations to the 1980s Thatcher-era, Clause 28 law in Britain that prohibited local authorities and schools from “promoting” homosexuality.

The Education Legislation Amendment (Parental Rights) Bill 2020, proposed by Latham, included clauses that would erase the rights of trans students and even forcibly out them to their parents.

According to the “parental primacy” clause in the Bill, school staff would have been required to inform parents about the gender or gender transition of a student if the child had confidentially come out to their teachers or school counsellors.

Other provisions in the bill barred high school trans students from participating in sports teams that align with their gender and allowed only trans girls who have undergone a full medical transition to use female toilets or facilities.

Advertisement
Another clause in the bill would have restricted participation of students below 18 in LGBTQI student support groups at schools, allowing it only if they had been granted consent by their parents.

The NSW government said that the Bill placed “teacher’s accreditation” and “their continued employment at risk if they breach the ‘parental primacy’ principle when teaching.”

The legal obligations and clauses in the Bill “placed an unworkable burden on teachers, counsellors and others bound by legal and professional standards.”

The government said that one of the major risks with the Bill was its potential to harm LGBTQI students. It pointed to statistics that showed the worsening mental health outcomes for LGBTQI students, who were five times more likely to attempt suicide than their peers.

Advertisement
“NSW schools have legal obligations to protect and support students, including those who are same-sex attracted or transgender,” said the government adding it “does not support the provisions of the Bill”.

Trans activist and acting Director, Community Health and Wellbeing at ACON Teddy Cook, who was the only trans person invited to give evidence before the Parliamentary committee that endorsed the Bill,   lauded the Liberal government for rejecting Latham’s proposed law.

“It’s fantastic to see the NSW government today stand by trans kids and their families, who already face so many barriers, and experience disproportionate levels of bullying and harassment,” Cook said in a statement.

“Trans kids already experience extremely concerning negative mental health impacts, as we see in research findings all over the world. One Nation’s Bill would only have made schools less safe for trans students, and placed lives at risk,” added Cook.