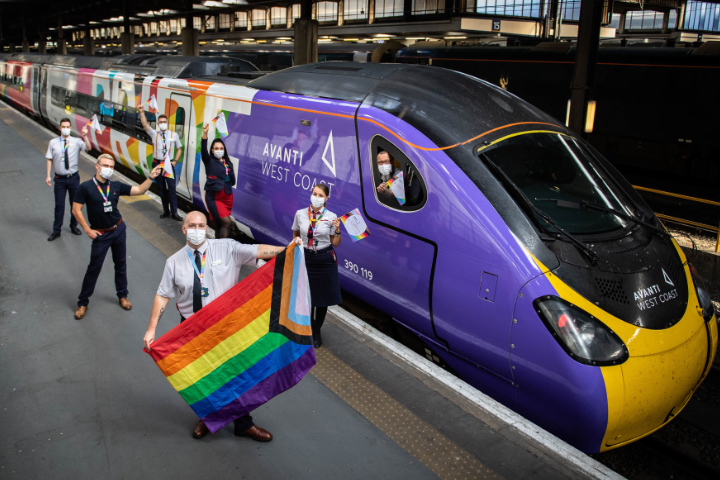 Following this year’s Pride Month, the UK’s first ever Pride Train set off on its maiden voyage Tuesday from London’s Euston station in Camden.

Launched by Avanti West Coast, the 11-carriage, 265-metre-long train will service London to Liverpool, Birmingham, Manchester, Wales and Scotland and features the ‘biggest Pride flag the UK has seen on the side of a train’.

The design itself makes a timely statement by including all the colours of the progressive Pride Flag, speaking to the need for greater inclusion and less discrimination coming from with the LGBTQI community itself.

Inside the train is set to be filled with ‘literature, stories and colourful posters and will feature Pride related information and fun facts during the onboard announcements’ and is to be staffed by an all LGBTQI crew.

Advertisement
Paul Austin, who works as a train manager for Avanti West Coast, said of the trains unveiling,  “Being a part of the UK’s first all LGBT+ crew is a sign of the steps we’re taking towards a more inclusive, diverse and equal society and I am so proud to be involved today.”

However, the UK’s first ever Pride Train has not embarked without the usual criticism.

‘Why do gay people need support from trains? I don’t assume a train supports straight people when it’s not painted in rainbow colours. This is utterly bizarre,’ tweeted Julia Hartley-Brewer of Britain’s TalkRADIO

Others have been quick to voice their opinions, calling it virtue signalling on the part of Avanti West Coast. However, a quick look at the company’s website reveals they are partners with both LGBT Foundation and akt and have a good track record of engagement with the LGBTQI community.

Advertisement
A competition will be launched on Tuesday to name the train, with the winning entry set to be announced in October.

“It is a symbol of our commitment to diversity and inclusion as it travels up and down the West Coast Main Line. We live proud 365 days a year, not just today.”