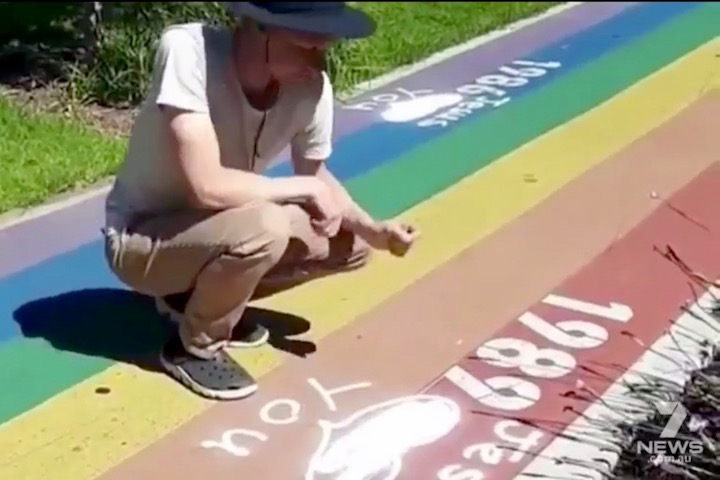 A man has been caught on video vandalising Adelaide’s iconic CBD Pride Walk with the words ‘Jesus loves you’.

Described by the local council as “disappointing,” the Light Square rainbow path which celebrates Adelaide’s LGBTQI community was vandalised on Monday afternoon.

The 28-year-old vandal was caught and confronted by onlookers, including a man identified only as Tom, as he spray-painted ‘Jesus loves you’ multiple times across the rainbow walk – deliberately covering up the landmark dates of South Australian LGBTQI history featured on the Pride Walk.

These key events include the state’s first pride march, the decriminalisation of homosexuality and the milestone of marriage equality in 2017.

“My boyfriend and I saw as we drove past,” Tom told Australia’s ABC News.

“[The man] was writing ‘Jesus Loves You’ on the top of all the printed landmark dates along the walk.

“We pulled around and I got out, snatched his spray can and bag of several more, took some photos of him — he calmly let me and then walked off — and I threw it in our car.”

Tom added that the man “didn’t say a single thing” throughout the incident, shortly after which Tom managed to flag down police who reported the Cowandilla man for marking graffiti.

“About 10 seconds later, some police drove past, I waved them down, and pointed him out to them.” Adelaide’s Pride Walk has been a prominent feature in the city’s Light Square since 2016.

Adelaide City councillor Robert Simms, who helped establish the path, said the vandalism and its message had no place in the community, and noted that work must still be done to keep insidious forms of homophobia out of Adelaide.

“The Pride Walk is about promoting inclusion and celebrating the achievements of the LGBTI community in SA,” he said.

“This vandalism is a sad reminder that despite all we’ve achieved on the road to equality, there is still work to be done to keep fighting homophobia in our city.”

Adelaide City Council has also denounced the vandalism and promised to remove the graffiti quickly.

“We’re disappointed to see that someone has written across the Rainbow Walk, which was installed in 2016 to celebrate our city’s diversity,” a council spokesperson said.

“Our graffiti-cleansing team will remove the graffiti tomorrow.”

Rainbow walks and crossings are becoming popular ways for city councils to acknowledge their LGBTQI communities and demonstrate their commitment to equality. However, defacing these landmarks is also becoming a popular way for homophobic bigots to send a clear statement.

Earlier in June this year, a Trump-supporting biker was arrested after he and a group performed burnouts at a rainbow crosswalk on Route 66 in Albuquerque, New Mexico.

Installed in honour of Pride Week, the crosswalk cost the Albuquerque City Council around $30,000 — roughly three times the price of a traditional crosswalk paint job.

The city council noted that it considered the crosswalk more than a paint job, as it was also intended to represent inclusivity.