Asexuality is a largely invisible and often denied sexual identity, one that Nic Spunde struggled with for a long time. SEX always made Nic Spunde uncomfortable, long before they began identifying as asexual, or “ace”.

At school their classmates would talk about sex, but those desires just didn’t exist for Spunde.

Advertisement
“I got sent to a boy’s school and I became aware I was different and weird,” they told the Star Observer.

“Sex always grossed me out, so I went through a stage of thinking I was supposed to make myself interested in sex – I ended up in an eleven-year relationship, but the sex and romance didn’t work.

“After that I didn’t care if I never had sex again.”

Asexuality is a sexual identity like homosexuality or heterosexuality, and an ace person is someone who doesn’t experience sexual attraction.

Spunde only discovered the word “asexual” as an adult.

“When I was young it always felt like something was wrong with me, but once I heard the word asexual I knew it was me,” they said.

“But I went through the process of questioning it for a while, speaking with people and going through medical tests.

“Most psychologists don’t accept it and pressure you into dating… it was rare to find a counsellor who found asexuality okay.”

Spunde said the sexual identities of ace people are often ignored, or denied.

“When I was around straight people who would talk about sex and focus on sex a lot, it was hard for me.

“They don’t think you’re a freak, they just think you’re making stuff up, and so a lot of the negative feelings I had about myself were internal.”

Spunde is currently undergoing a gender transition, and said that in the trans world many have assumed their transition would by extension somehow make their asexuality go away.

However, Spunde said they can’t begin feeling desire for something they never have before.

“The gender stuff doesn’t affect how I feel about it, and it’s not the reason I’m asexual,” they said.

“When I was first coming out trans people would assume I’d suddenly be interested in sex.

“They’d say, one day someone’s going to fuck your brains out and you’ll see how great it is.

In their first solo show, Spunde uses personal stories from their own life to offer a humourous view of an often invisible sexual identity.

“Art addressing different aspects of queer identity is a powerful way to engage people,” they said.

“When I was a teen there was almost nothing for queer people – and there certainly wasn’t for ace people.

“It’s powerful to see your identity reflected in a show.” 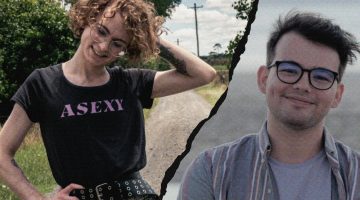